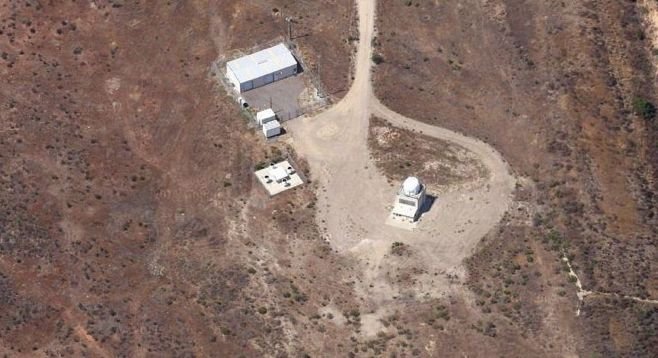 Mystery of the Jiffy Pop building

Hey Matt:
What’s that odd building that is visible from the 52 between 163 and I-15? There’s a small cluster of buildings, and one has something round on the roof.
— Lisa

At first I thought you might have meant the sheriff’s department pistol range, which is out in east Miramar, but then I studied the map. That area is still technically within the bounds of the Marine Corps air base, so the driveway that leads down to the trio of buildings doesn’t have any signage or anything, which heightens the mystery. That little round-roofed building looks pretty cool, like some top-secret espionage stuff might be contained within...or maybe it’s filled with weapons-grade Jiffy Pop. Turns out that it’s nothing special. The three buildings are warehouses, mostly for equipment used in firefighter training that takes place in the eastern portion of the MCAS Miramar territory.

While I support military secrecy, and don't own a tinfoil hat, I'm not buying the story. Google Earth shows 4 white trucks, two with service beds loading or unloading stuff. What exactly is the square pad with 4 circles? Vents for an old silo? Why does the other building have a dome on top? What kind of radar or stationary optical equpment do firefighters need to practice on a narrow point of nearly bare earth?