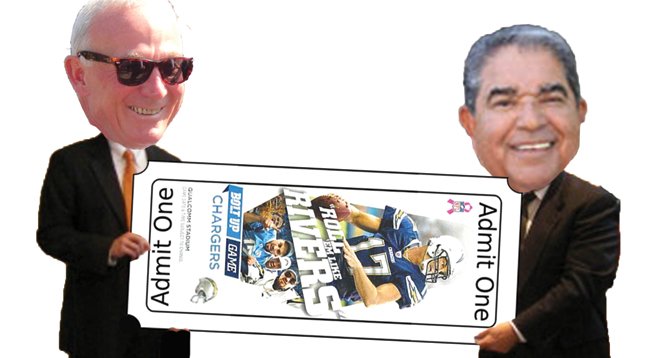 Former San Diego mayor Jerry Sanders left office last week in a familiar way, reporting the gift of a free Chargers ticket he made to a fellow pol. The final disclosed recipient of Sanders’s largesse: Rudy Castruita, retired superintendent of the San Diego County Office of Education. According to a gift-report form posted online on Sunday, December 2 — the day before new mayor Bob Filner took the oath of office — Castruita got a single admission valued at $98 to a game on November 6. Because Sanders has been fast and loose with the city’s inventory of Chargers tickets, the gift to Castruita might not seem noteworthy, except that it was for a game played last year. Castruita, presumably, watched the Chargers lose to Green Bay, 45-38. Why it took Sanders so long to post his gratuity to the retired school administrator is unknown; neither Sanders nor Castruita returned phone calls. Castruita is most famous for getting an annual pension of $281,034, which is 107 percent of his salary, according to a December 2010 report in the Union-Tribune.