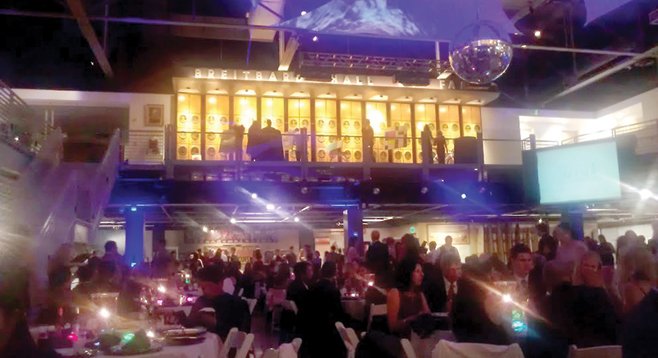 Dancing in the bones

Did you hear the one about the triathlete who crashed and broke her arm trying to ride her bike down the sidewalk? I did. Heard it straight from the bruised party’s mouth at the third annual Hammer Festival this past weekend. She was still wearing a little mitten for a brace.

You want to know: What’s a Hammer Festival? Is it a celebration of the carpenters’ tool? Perhaps it’s a retrospective on the glory days of parachute pants and being “too legit to quit”? A convention for Thor wannabes?

None of the above. Hammer Festival is a bash for the endurance-athlete community, with a twist of charity fundraiser. The name’s a play on “hammer fest,” which is a term cyclists and other endurance athletes use for intense workouts. Cute, huh? Way to take a grueling experience and turn it into fun! This year, the affair raised a bundle of cash for the Cystic Fibrosis Foundation via silent auction and raffle. Other than the dude who had to dance Gangnam style when he won a new bike, everybody seemed to enjoy giving away their loot to help fight the terminal disease. Even the horse-dancing guy was pretty into it. 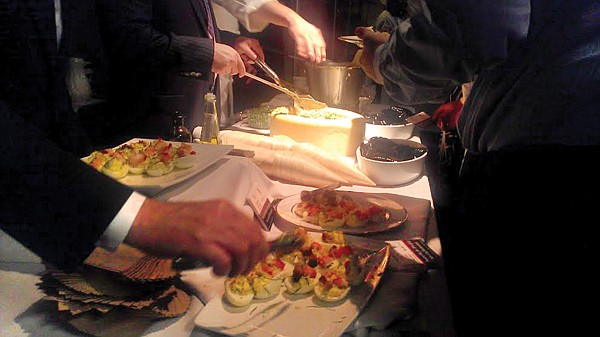 I’ll be the first to admit that charity galas can be lame, but the organizers let the Hammer Festival be a real party. There was plenty of food from a grip of local restaurants, so I got to pig out on curry, cupcakes, and these little deviled eggs that had pork belly and poached lobster on top of them. This girl named “Marvi,” which might very well be short for Marvelous (in which case her parents were awesome), took a clean plate up to the buffet to speedily cheat her way to seconds, the sneaky little minx!

Before they let us party in earnest, there was a sportswear fashion show. Several lovely women had been hiding in the wings, wearing naught but lycra unitards and high heels, and they paraded across a makeshift catwalk to the furious strains of blaring house music. Girls in spandex cycling kits and three-inch stilettos is a must-see event, the awkward/sexy fabulousness of which is hard to convey and sound sincere about. 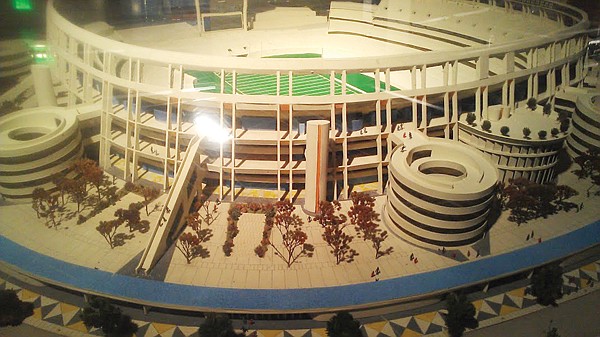 This architectural model of Qualcomm Stadium is one of the exhibits at the hall of Champions.

You wouldn’t think the Hall of Champions would be a good party venue, but it was ideal, and not just because of the sweet sports memorabilia. I saw Ted Williams’s old baseball jersey, an Olympic sailboat, and the architects’ model of Qualcomm Stadium (complete with miniature trees, cars, and people). At one point in the evening, I met a guy named Ted Williams, who was a graduate of Hoover High School. I think his dad might have been a baseball fan. I don’t usually get all googly eyed over stick-and-ball stuff, but the sports museum is rad.

And it has killer acoustics. When DJ Bugz (the resident DJ at the Tipsy Crow) got the okay to crank up the volume, it was as good as most nightclubs. Bugz’ style was poppy, loud, and a touch Euro, which fit the crowd, since being an enduro involves a requisite degree of Europe adoration. Everyone was there with charity on the mind but dancing in the bones. I’ve seen some desolate dance floors at parties and galas, but the Hammer Festival wasn’t one of them. Despite having to pay for drinks (boo!), partygoers emptied plenty of glasses and let the music move them. They didn’t close the bar until almost midnight — pumpkin time for anyone who has to get up and ride a bike for five hours on Saturday morning.

Amazing event! Great review! Thank you Ian for crashing it! :)