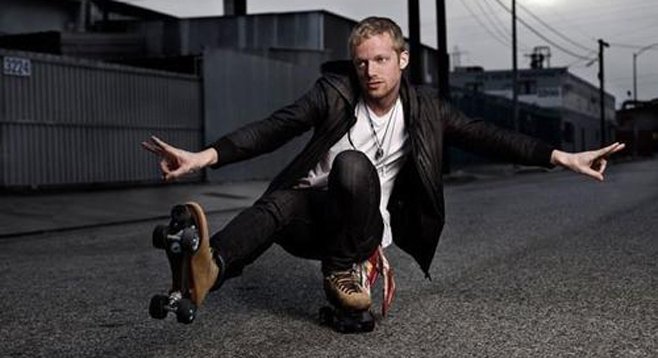 Thursday 13
Need some art? Want to save some tail? Well, look no furrrther than El Dorado downtown, where lo-fi electro-pop duo Lion Cut is hosting an art auction slash benefit for big kitties. The pair will purrrform in their TM feline attire while a silent auction featuring the work of 30 local artists raises funds for all the big jungle cats under the scope of the World Wildlife Fund’s “Save Tigers Now.” The video for the teaser tune, “Tiger Bomb,” is pretty awesome: vimeo.com/42500587.... Miss the door there, right down the street at House of Blues, surfer/shredder Gary Hoey’s out to tout his new joint, De Ja Blues, the hard-rocker’s first foray into trad blues.... Uptown, Bay Area band Soft Moon waxes on the Soda Bar stage. The synthpunk five-piece is touring in support of this year’s “less song-based, more sound-based” Zeros, a fuzzed-out Goth-er, if ever there was. Read Will Crain’s take in this week’s Of Notes. Group Rhoda and Tropical Popsicle open the show.... And over in Bay Park, Brick by Brick unsheaths the Sword. The doom-metal band’s latest, Apocryphon, is full of Sabbath-flavored riffs, “summoning you to bang your head and celebrate the apocalypse.” For all you Mayan apocalypsers, I guess. Gypsyhawk lands first. 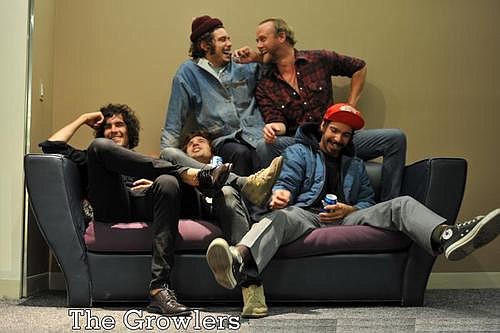 O.C. psych-rockers the Growlers check into Casbah for two nights Friday and Saturday.

Friday 14
“If Beck were a decade or so younger and had grown up more heavily immersed in hip-hop...” Cribbed that from Wikipedia because I wasn’t hip to who Astronautalis was — is. He is Charles Andrew Bothwell of Minneapolis, Minnesota, and apparently he’s got a gifted gabber, riff-rapping about any damn thing you throw at him. He also makes records, like last year’s This Is Our Science, which despite no budget beat it up the Billboard charts by interweb word-of-mouth. Check this out: youtube.com/watch?v=4N4YeNYbU5I. Catchy. He looks like Mitchell, the gay gingerballs from Modern Family. Astronautalis lands at Eleven Friday night after Busdriver, Jel, and Mystery Cave. DJ Psychopop (Skrapez?) spins ’round sets. Recommend you hip-hop online right away for them advanced tix, yo.... O.C. psych-rockers and Casbah faves the Growlers are in town for two this weekend. The quintet’s got a new disc of drug-bent ditties in the hopper, Hung at Heart, due to drop in January, so expect a healthy dose of those new tunes. TRMRS and Barbarian share the bill Friday night. On Saturday you’ll see Tomorrow’s Tulips and Wild Wild Wets.... Daydream Nation’s bringing another doozie to the Griffin, featuring a wicked listenable threeway with the pop-punk Soft Pack, lo-fi locals the Plateaus, and Cali-pop sextet Ale Mania. Still spinning Soft Pack’s September release Strapped. It’s a grower.... Else: right around the bend at Brick by Brick, Metalachi and Mex Zeppelin will play some heavy-metal mariachi for you...the dudes who do Operation: Mindblow apparently have a band called California666, and they’ll be playing the Shakedown with Joy and Harsh Toke for “a night of tripped-out psych”...DJ Robin Roth will host her weekly dark-dance jam Club Pussy Galore at Whistle Stop, after River City and Boy King (née Bunny Gang)...and that “curatorial” covers band, Rio Peligroso, returns to the Riviera Supper Club’s Turquoise Room for a night of country-fried alterna-rock. 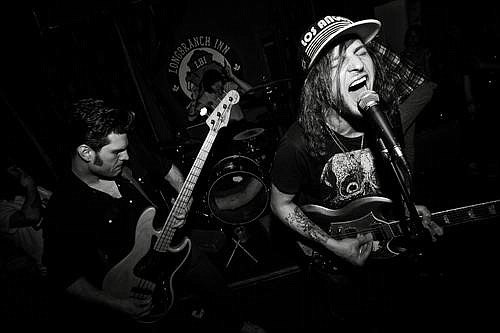 King Tuff will rule the stage at Til-Two Saturday night.

Saturday 15
Couple of anniversary celebrations will pop the cork Uptown Saturday night, as local Lurkville USA drops in on their third year in the biz of building skateboards. They’re staging Kyle Thomas, aka King Tuff, who was the frontman of J Mascis’s Witch and Sub Pop psych-poppers Happy Birthday. Dude’s got the Midas touch. With like-minded locals the Kabbs and Chango Rey setting the stage, this is a kill triple bill at Til-Two in City Heights...and the Thrill Jockey 20th Anniversary tour rolls into nearby Soda Bar with DC post-rock trio Trans Am, High Places, Man Forever, and Trans Am Phil Manley’s solo show, Life Coach.... Ssstaying Uptown, Sssnake slithers into Tower Bar after Hobotorch. Noah Tabakin, the man behind Ssssnake, has been likened to a hip-hop Jeff Buckley. I can see that.... Dead Animal Mod, Stupid Man Suit, the Vaginals, and Penis Hickey fill a noise-rock bill in Bankers Hill at the Tin Can Alehouse.... While northa town, jazz guitarist Peter Sprague joins pianoman Irving Flores at Dizzy’s new digs in P.B...and Oak-town trip-hop duo Zion I pops the mic at Porter’s Pub behind this year’s punchy Shadowboxing. 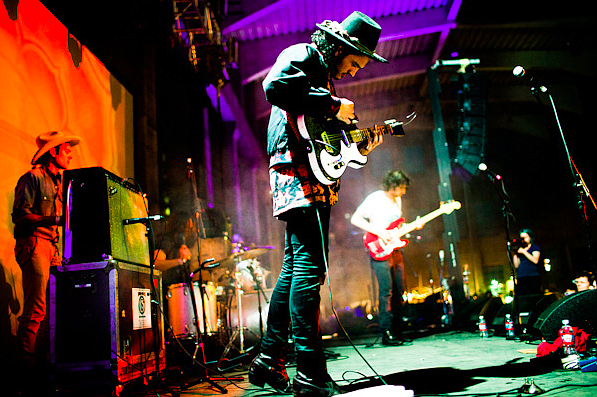 Soda Bar sets up the retro-rocking Night Beats for a Monday must-see.

Monday 17
Soda Bar sets up psych-rock Seattleites Night Beats Monday Night. I picked up the Beats’ s/t debut on their previous swing through town and haven’t ejected it from the truck’s carousel since that night. Their retro hoodoo has me, and with Portland psych-pop trio the Woolen Men and like-minded locals Wild Wild Wets opening the show, this is, imho, the gig to get to this week.... Uthawise: L.A. trip-hop twosome Eligh & the Grouch (Living Legends) bring their How the Grouch Stole Christmas show to Porter’s Pub at UCSD. 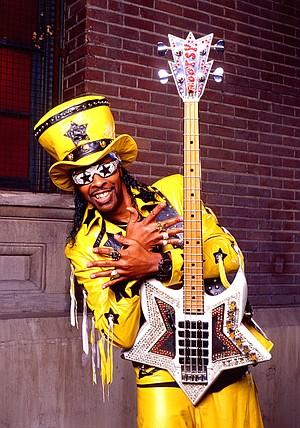 Spend an evening with badass bassist Bootsy Collins at Belly Up on Wednesday.

Tuesday 18
It’s time for SanDago staple Gary Shuffler’s (Honey Glaze) birthday bash, when Shuff dons his screwed-up eyes and screwed-down hairdo as Ziggy Shuffledust & the Spiders from Mars. If you’ve never seen a Shuffler trib, which includes Bauhaus, Queen, and GNR, then you’re in for a treat, Bowie fan, as the performer and his all-star band rock the Thin White Duke right over the top. DJ Diana Death will deck the halls with her deep-crate faves.... The rest of you: Blackberry shill Diplo’s worming earholes with his brand of electro-gaga at Voyeur. Wait for that beat to drop...

Wednesday 19
From Tha Funk Capital of the World, that bass-slapping badass and Rock and Roll Hall of Famer Bootsy Collins takes the stage at Belly Up Wednesday night. Funk Capital, a phunky foray into hip-hop beats, is Bootsy’s 13th solo studio set (y’know, to go along with the hundred or so Parliament records he’s on), and features vocal takes by Cube, Snoop, Chuck D, Dr. Cornel West, and Samuel “Bad Muthafuckah” Jackson. Bootsy can play some drums, now, so be ready for that if he’s so inspired.... Else: Bay Park’s going to get loud, as Brick by Brick brings in heavy metallurgists High on Fire, Corrosion of Conformity, and Goatwhore, yes, Goatwhore. Maa-aa-aa.
— Barnaby Monk