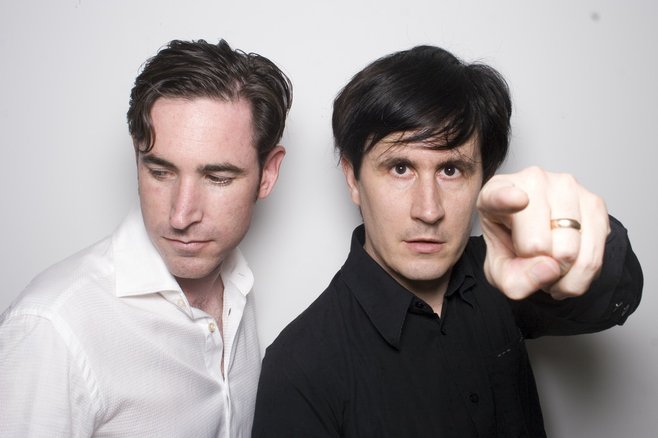 Thursday 6
I’m not going to geek out on the Black Crowes or the super-soulful singing of that blues-rock jamboree’s ringleader. I’m not. (Dave crowed enough in this week’s Of Note for both of us.) I could totally geek out on Chris Robinson’s talented sidemen (esp. lead guitarist Neal Casal), the Brotherhood, but I won’t. Suffice to say, CRB is the 21st Century’s Dead, with a nice balance of hot licks, chilling harmonizing, and clipped psych-folk-jam-banding for the ADD generation. 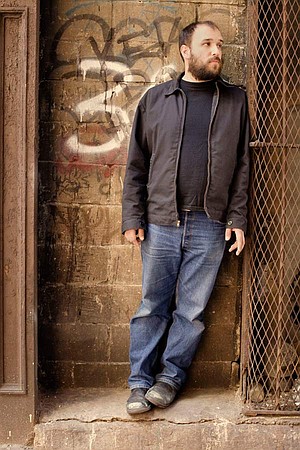 That, and fans can invest themselves in the band’s records. This year’s companion discs Big Moon Ritual and Magic Door are as advertised: “a breathing kaleidoscopic thing stuffed with chooglin soul, bedrock boogie, and shuffling wisdom.” As I type this, I’m looking forward to Wednesday night’s show at Belly Up, and I’ll probably end up going Thursday as well. See you on Cedros.... Singing, songwriting Seattleite David Bazan made his bones in the theologically driven indie-folk band Pedro the Lion. Since 2006, Bazan’s been rolling solo, but he’ll also treat a Casbah crowd to Pedro’s 2002 high-water mark, the concept record Control. Dark-pop duo Stagnant Pools up first.... Best of the rest: Bar Pink books ’Zonie Brian Lopez (“the Latin Jeff Buckley”), who drags a Beatles-trained guitar through the desert on debut Ultra...Austinite Tom Grrrl will deliver brand-spanking new dance-punk disc Even When She’s Losing, She Is Still Winning to Til-Two after lo-fi locals Teenage Burritos and Painted Mirror...and there will be a tribute to Chicago blues-harp great Little Walter at Anthology, featuring an army of modern harp heroes, including Charlie Musselwhite, Billy Boy Arnold, and James Harman.

Friday 7
Champ Kind: “I’m kinda known for my catch phrase, ‘WHAMMY!’” Get your RDA of rockabilly, cat daddy, when Stray Cat Slim Jim Phantom, Tom Polecat of the Polecats, and the Guana Batz’ Johnny Bowler bring their greazy-beat trio Whammy! to Casbah on Friday night. Whammy!’s website promises “a three-pronged frontal assault of neo-rockabilly.” I’d wear a cup. Big Sandy and his Fly-Rites and Roy Rapid & the Rhythm Rock Trio open the show.... More greazy treats out at the beach as Fabulous Thunderbird Kim Wilson visits Winstons with his Allstar Blues Revue...Bob Weir (Grateful Dead, the Other Ones, RatDog, Furthur, just to namecheck the namecheckables) will be at the Balboa Theatre downtown. With a new solo set in the works, Bob’s kind of stuck in a jam he started in ’04. As always, hippies use the side door...up Fifth in Bankers Hill, Tin Can Alehouse stages punk’d throwbacks Sculpins, Eskera, and Nutstache. Wait, whatstache?...there will be some freaky-deaky surf-rock sets at Soda Bar with Creepy Creeps and Mrs. Magician...while northa town, Nawlins rapper Curren$y rocks the mic at Porter’s Pub behind this year’s Muscle Car Chronicles. 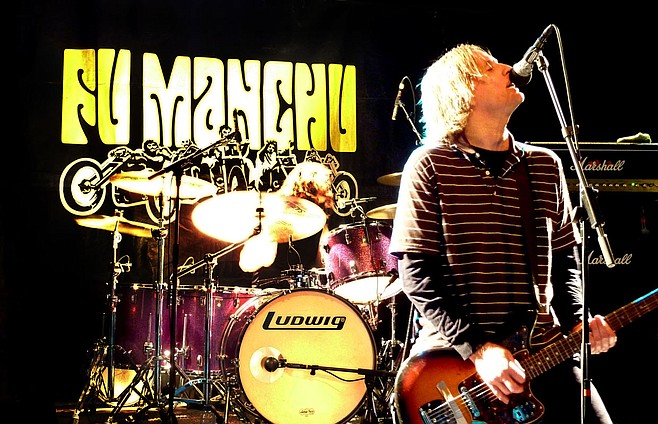 Fuzz-rockers Fu Manchu roll into Brick by Brick on Saturday.

Saturday 8
SoCal stoner-rock quartet Fu Manchu will stack ’em at Brick by Brick Saturday night. Scott Hill’s been driving the bus for 25 years now, through hardcore’s heyday to a fuzz-rock comfort zone somewhere between the sound of overhead surf and Sabbath — no chord progression too simple, Hill’s riffs aim to rock balls before brains. They announced a new record this summer, but nothing’s come up. King of the Road still shreds best, and The Covers, if you can find it, is a funyun (Void, Van Halen, Circle Jerks, the Cars, Thin fucking Lizzy).... Miss the door at that Bay Park bar, right around the bend, like, stumbling distance, Scottie “Mad Dog” Blinn’s Black Market III and the Boondock Bros. will take the stage at the Griffin.... Broken Social Scenesters. House of Blues is going Metric. The Emily Haines–fronted Canada band is out to tout this year’s Synthetica, which Haines describes thusly: “[It’s] about staying home and wanting to crawl out of your skin from the lack of external stimulation.” She is cute. With Grand Tarantula and Beast Patrol, this is a solid triple bill downtown.... Udderwise: It’s New Wave Night at the Shakedown, when Neon Kross (Daniel of Rezurex and the Deep Eynde) and the Very (Diana Death’s other other band) take the Midway stage. DJs Bryan Pollard and Heather Hardcore spin ’round sets...while on the other side of the tracks, O.C. ska-punk perennials the Voodoo Glow Skulls light up the sidestage at Soma. 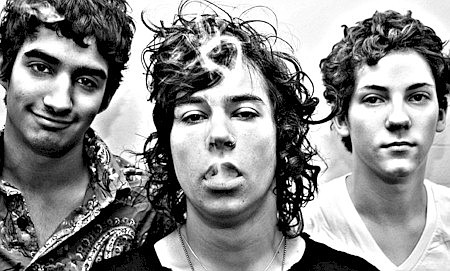 Sunday 9
Soda Bar stages Nashville garage-rock groovers Turbo Fruits. This year’s Butter is a tasty platter of road-warrior rock (they were, once upon a time, the fast-tracked Be Your Own Pet). With its barnburners and beer-buzzed vox, Butter’s party rock for the after-party, and the Fruits crush it onstage. With Vancouver she-punks White Lung and SanDago rock-roll classicists Mrs. Henry opening the show, this is a damn good reason to go out Sunday night.

Monday 10
What a Monday, music fan! John Darnielle’s acoustic-punk Mountain Goats deliver this year’s dinner bell for outcasts, Transcendental Youth, to the Irenic in North Park...NYC retro-pop four-piece the Babies (Vivian Girls, Woods) crawl into Eleven behind Our House on the Hill...Portland indie-folkies Horse Feathers hit Soda Bar with their latest, Cynic’s New Year, and one-man folk revival Frank Fairfield...Eddie Spaghetti and the self-proclaimed “greatest rock and roll band in the world” the Supersuckers are at Casbah...and K Records bed-sit recording artist Generifus comes out of his cave to play Ché Café. 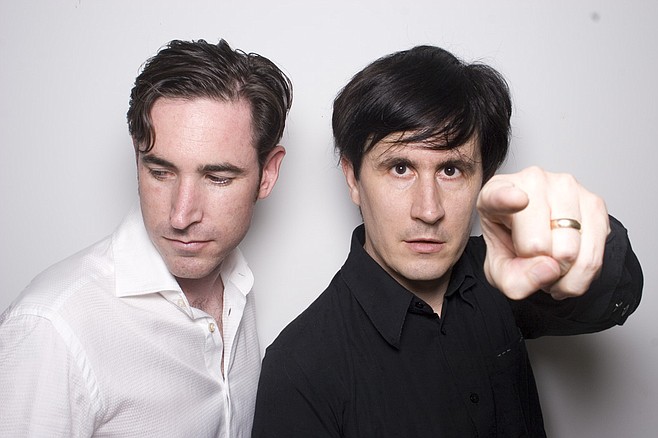 Folk-punk poet John Darnielle and his Mountain Goats migrate to the Irenic on Monday.

Tuesday 11
“Snoop went to Jamaica a Dogg but returned a Lion.” Snoop Lion roars at Belly Up in advance of Reincarnated, the hip-hop hit’s 12th studio set, which is due to drop next February and debuts Snoop’s new reggae flav.... Hardcore honky-tonker and alt-country touchstone Wayne “the Train” Hancock rolls into Shakedown. Can’t recommend Train’s Viper of Melody enough. The 2009 collection listens like a master’s class in country’s shared roots with jazz and blues.... Northwest avant-rock experimentalists, the oft-droning Thrones (Melvins, Earth, High on Fire, Sunn O)))), plug in at Soda Bar with like-minded locals Bangladesh and White Mule (Sirhan Sirhan/Marsupials).

Wednesday 12
Chuck D, Flavor Flav, Professor Griff, and DJ Lord bring New York hip-hop collective Public Enemy (“Fight the Power,” “Bring the Noise”) to 4th&B downtown. The trend-benders are touring in support of this year’s well-received companion collections Most of My Heroes Still Don’t Appear on No Stamp and Evil Empire of Everything. Public Enemy never wavers in its beat, grind, or social politiking — Chuck D’s “Beyond Trayvon” is a killer. Call club for confirmation on this gig. Things are all kablooey with this joint right now.... Else: Dum Dum Girl Dee Dee and her Crocodile hubby Brandon will play an acoustic set at Soda Bar after Heavy Hawaiiweighs in...and seeing as it is 12/12/12, Casbah’s got Twelve, a Spinal Tap tribute that’ll probably hit the stage right at 12:12:12, if I know them Blasphemous Guitars. Two of the scariest bands in the land, Deadbolt and the Satanic Pupeteer Orchestra, set it all up.
— Barnaby Monk