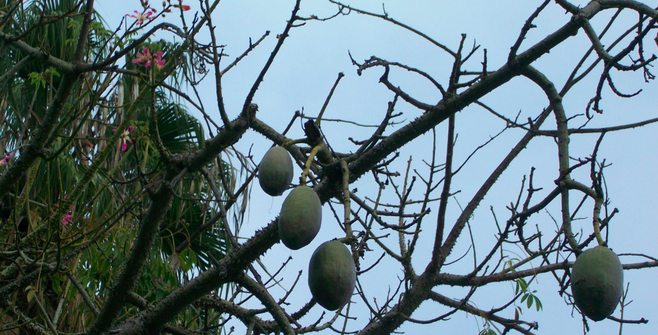 Some people at the Vons shopping center at 3645 Midway Drive are puzzled by an odd-looking tree that is growing along the driveway behind Fantastic Sam's. Some mistakenly identified it as an avocado tree.

This past summer, the tree had a profusion of pink flowers that attracted bees. The unusually large pods hanging from the tree and the bark's sharp, spiky thorns give it an otherworldly appearance.

I did some investigating and found out that the specimen is called a “silk floss tree.” Also known as Ceiba speciosa, it is named for its "soft silky fiber surrounding the avocado-sized seed pods," according to pinecrestgardenguy.blogspot.

The tree originated in South America and is found planted along Los Angeles–area streets.Thriving in poor soils, the trees require very little in the way of care, which makes it a popular choice for urban landscapes.

Also known as a Kapok tree. This stuff that was once used in life preservers. You can also see one of these trees along the back side of Spanish Village (actually the East side) along the sidewalk that goes from the Carousel to the Village. Not a tree you would want to climb because of the huge thorns. And yes, the pods are really weird.

This isn't a kapok tree. Ceiba pentandra is the kapok tree. Obviously similar, but not the same. The kapok tree is substantially larger. If you've been to Hawaii, they are all over the islands. There used to be a large specimen, close to 150ft tall in Foster Botanical Garden on Oahu. I found this pic. The "stuff" used in life vests was the fibrous vegetable material found in the seed pods. 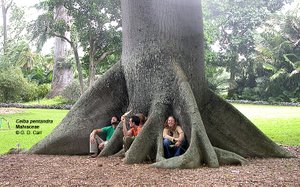 Thanks for the correction, Tom. Could have fooled me. That giant in Hawaii reminds me of the huge ficus trees near the foot bridge in Balboa Park.

I think it is a silk tree . large green pods until they open then turn into a fluffy white seed deposit. the flowers are pink at least they are on the tree at A & 26th near the golf course/rec center .