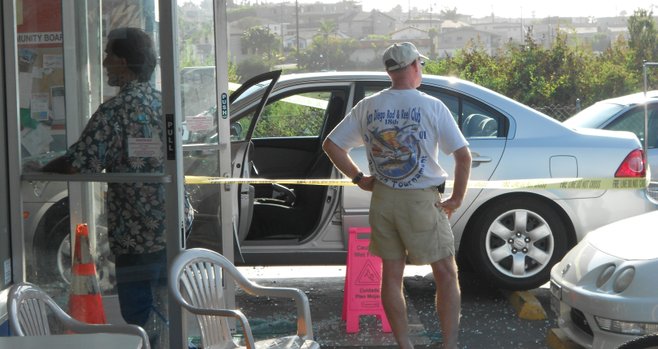 Several customers washing or drying their clothes at the Point Loma Coin Laundry were lucky to have avoided tragedy on August 11. A silver Kia slammed through the glass window at around 5 p.m.

A middle-aged Asian woman, who appeared upset, was "backing up her car but accidentally hit the gas and lurched forward," said a witness standing outside the laundromat located next to Famosa Slough (2926 Adrian Street).

A customer who witnessed the accident told me she was glad she was not sitting in the seats next to the entrance.

At least five San Diego police officers responded to the accident scene and put caution tape around the car. A traffic officer told customers to collect their belongings — including unfinished laundry — and leave, since the coin laundry would be boarded up as soon as a tow truck arrived to remove the auto.

Shattered glass littered the area around the car and the distraught driver worried that the accident would cost her "millions."

She should worry. This is the sort of thing that happens daily around here that is inexcusable. I'll probably be called racist for making this comment, but my experience has been that Asians, for what reason I cannot fathom, just don't drive well, capably or attentively.

Yup. You're racist. Everyone knows it's the Mexicans that can't drive. And the Italians can't talk right....and the Irish cannot drink for the life o' them! The truth is...Shhhhh! It's the women. Seriously, have you ever seen the trouble they have with parallel parking? They don't get the part about "turn left, while in reverse, and you will go right." They don't get it; they've never got it; and thank God, the car companies have recognized this and are now making the cars that park themselves--because the women can't do it! But don't tell anyone I said that.