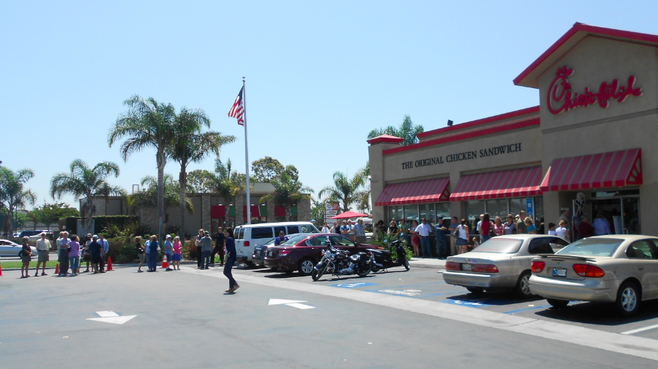 No Kiss-In, Lots of Chicken at Restaurant Protest

The Midway District Chick-fil-A location had a long line of customers waiting to eat when I arrived for lunch at 11:00 a.m. on August 1. It took at least one hour to get inside to grab a spicy chicken sandwich.

The restaurant was unusually crowded with diners in response to the announcement that gay-marriage proponents would be protesting at Chick-fil-A; company president and CEO Dan Cathy’s recent statements discounting gay marriage had upset people enough to announce a national protest against the Atlanta-based chain.

Cars at the drive-thru wrapped around the parking lot to the nearby gas-station driveway. No evidence of a gay protest was seen among the people. There was some talk that gay-marriage proponents plan a “kiss-in" demonstration at Chick-fil-As this Friday.

I asked a lady in line why she was there. "Karen" said that she "was proud to be a customer of a company that was not afraid to stick up for Christian values."

Toward the dinner hour, the length of lines tripled. People snaked around into the Sports Arena parking lot, directly behind the restaurant. The drive-thru line was so long, it ran across the driveway and into the SOMA parking lot, where the Black Angus restaurant once stood. Despite all the waiting and traffic congestion, no one seemed to be in a foul mood.

Very funny last line - I get it

May I also add that local Channel 10 News reported that this Sports Arena Chick-fil-a ran out of food yesterday evening! 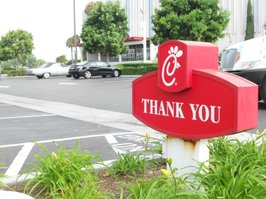 The Chicken kiss-in is for Friday. Sounds like you'll need to bring your own chicken. I'll stay home and do my kissing...