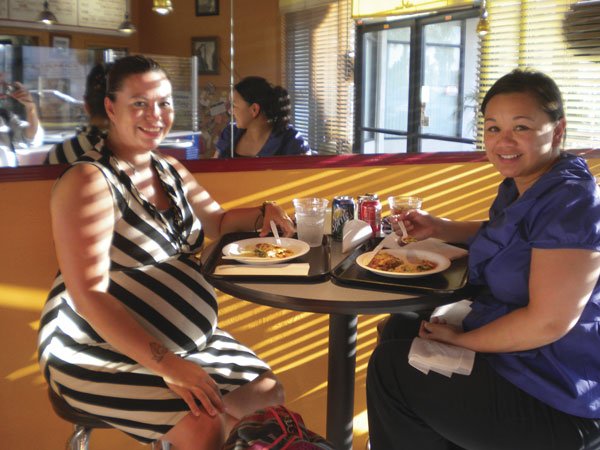 “Bacon, avocado, cheese... Back in Tunis, Brittany, they’d freak out at that.”

The sun slants in through the venetian blinds, casting angled stripes across Christine’s arms and face. She’s wearing a striped dress, too, so it’s kinda cute. She’s chatting away with her old school buddy, Cathy, while they nibble at their savory crêpes.

It’s early evening up here in North Park. I’ve seen this modest-looking li’l place time and again from the number 2 bus. Figured it was time to check it out.

Inisde, it looks magical. Maybe it’s that slanting light from the sun. It’s a small room with the counter cutting it in two diagonally, so the three or four tables have to fit into a triangle. But mirrors and goldy yellow and ruby painted walls keep it open and cheery.

I spot the two gals before I see Sami, the crêpe master behind the counter.

Wow. Who’d think of spinach and crêpes in the same breath? I check the large board menu hanging on the wall above the counter. Spinach…she’s having either Popeye’s Revenge (with spinach, avocado, cheese, and garlic, $8), or the Vegetarian Knock-Out (with mushrooms, tomato, spinach, and cheese, $8).

Christine tells me this is kind of a reunion for her and her long-lost friend. Cathy nods and grins. She’s downing a California Surfer crêpe (with bacon, cheese, and avocado, $8). Predictable ingredients, but it smells awesome.

I head for the counter and face Sami. He looks familiar.

“Farmers’ markets?” he says. “We’ve been making crêpes in most of them for six years. Hillcrest, Little Italy, Temecula, all over the county. For as long as we’ve been open here.”

That has to be it. Bet I saw them in Escondido.

The menu divides crêpes into savory and sweet. Savory has things with very un-French names, such as Porky’s Favorite (stuffed with ham, mushrooms, and cheese, $7), Pacific Catch (tuna, spinach, onions, cheese, $8), and Green Hen (breast of chicken with avocado, tomato, cheese, $8). I don’t look at the sweet crêpes, ’cause I know I’ll be tempted. But, heck, can’t miss with bacon, avo, and cheese: the California Surfer it is.

Sami makes quite a show. He grills the bacon and cheese on one hotplate, pours the crêpe onto the other, then a big scoop of guac. He folds the crêpe in half, ladles the bacon-cheese in, makes a cornet shape, and, voilà. It’s hot, tender, tasty, like a delicate burrito. Or a sandwich with bread you’ve just baked. 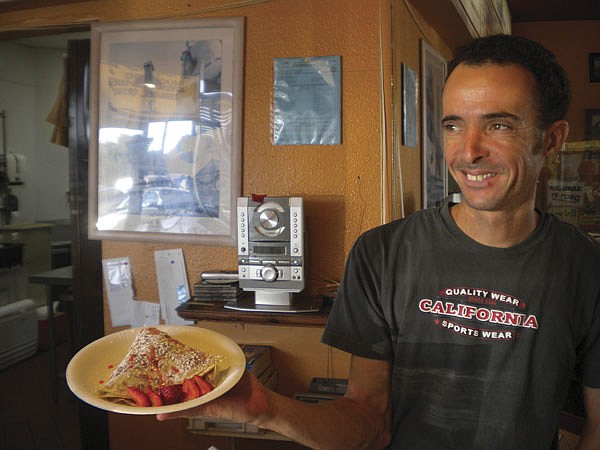 Mark serves up a dessert crêpe.

But what really excites me is the idea that, in Tunisia, where Sami’s from, they’ve been eating these things since before the Romans invaded, 2000 years ago. So, with all our new products and processes and miracle diets, here I am eating one of man’s ancient foods. I bet Cleopatra offered one of these to Antony. Maybe in aspic, heh-heh.

In Europe, Sami says, Brittany, in northern France, was the first place to make a big deal of crêpes. They called them galettes de Sarrasin, after the Crusaders brought back buckwheat from the Holy Lands, where they’d been battling the Saracens. They found that buckwheat grew better than wheat in the poor soils of Brittany.

“Well, not quite,” he says. “These crêpes are totally Americanized. The names, the things we put in them. Like yours, bacon, avocado, cheese. Back in Tunis, Brittany, they’d freak out at that. There, crêpes are smaller, simpler, thinner, unchanging, traditional. Maybe ham and cheese, but that’s about it. And on the sweet side, sugar, perhaps; or Crêpe Suzette, with caramelized sugar, butter, OJ, and a splash of Grand Marnier liqueur, plus brandy to set alight on top. That’s the showpiece. But, really, you can put anything in a crêpe. It’s just a vessel.”

Whatever — this vessel really floats my boat. Bacon-cheese-avo inside that light-as-a-breeze crêpe cornet is lush. It’s in no way doughy — a light meal, but a meal all the same. My only struggle is blocking out the sweet side of the menu. Hmm…the simple sugar and lemon or cinnamon crêpes are just $4. So is the chocolate crêpe, and the Crêpe Confiture (with jam). The Jamaican Promise, with banana, rum, chocolate, and cream, costs $7.

Oh, Lord. I scrabble through ye olde wallet to see if I have enough for a second crêpe. Yes! Just.

Then my pocket vibrates. Cell phone.

Women. Incredible timing — earlier, she wanted to know where I was headed, and I blabbed.

“No, babe,” I say. Might as well tell all. “I’m looking at something called Summer Blush.” It’s $7, and almost like Crêpe Suzette, but with strawberries, Grand Marnier, cream. “Can you handle that?” I ask.

“On one condition,” she says. “You’ve got to promise to keep your grubby hands off of it.”

I’ll just sit there with big eyes, waiting like a dog. She’ll crack. ■