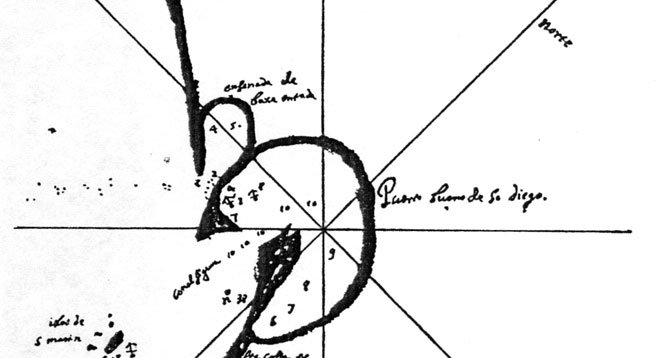 Fifty years after Columbus first set sail, Juan Rodríguez Cabrillo discovered “a sheltered port and a very good one” on the California coast. Guarded by a steep promontory, dark green with vegetation, a channel doglegged gently into a large bay. Cabrillo saw “good land” in the foreground, high mountains behind.

On September 28, 1542, Cabrillo named the bay Puerto de San Miguel for the saint — whose feast day was September 29 — and for the smallest of his three ships, a ramshackle frigate that always needed repairs.

Naming the finest natural harbor he found for the San Miguel prompted “some grumbling among the crew members,” writes Harry Kelsey. They “evidently demanded a similar honor, so the next important discoveries were named after the other two ships, San Salvador and La Victoria.”

Cabrillo estimated the latitude at 34 degrees, 20 minutes. No one’s certain how he determined this figure, whether he used a cross-staff or an astrolabe or just the altitude of the sun. What is certain: his measurements were off by two degrees — approximately 120 miles.

No one followed up on the discovery for 60 years.

On Sunday, November 10, 1602, the explorer Sebastian Vizcaíno came to a bay much like the one Cabrillo described: “secure from all winds” with good anchorage and “very good wood and water, many fish of all kinds.” Vizcaíno ’s diarist proclaimed it “the best to be found in all the South Seas.” But it couldn’t have been San Miguel. This bay stood at latitude 33 1/3.

Even though the viceroy of New Spain ordered him not to rename Cabrillo’s sites, Vizcaíno disobeyed. This was his bay, certainly, not Cabrillo’s. So he named it for his flagship and the saint’s feast day (November 12): San Diego de Alcalá.

Vizcaíno ’s reckonings were off as well. The tip of Point Loma is near latitude 32 degrees, 40 minutes. But instead of San Miguel — which by rights is what it should have been named — the bay is called “San Diego.”

When Vizcaíno’s three ships lay off Point Loma, they didn’t just sail into the bay. Kelp beds thick as broccoli clotted the surface. Another potential hazard: a partly submerged, mile-long shoal — the zuniga — jutting from an “island of sand” (North Island) on the right. The channel was reasonably wide, but the currents made it clear that ships should steer a good half-mile from the green promontory to the left.

Father Ascensión, who kept an account of the voyage, says the fleet entered at 7:00 p.m. on Sunday, November 10. That would have been in darkness. More likely, launches rowed in earlier that day. They tested currents and searched for submerged rocks — and found none, a promising surprise. They determined the safest course and reported back. The larger ships waited for a favorable flood tide to make the move: the small frigate, Tres Reyes, first, then the flagship, San Diego, and the worm-eaten galleon, Santo Tomás.

The expedition left Acapulco on May 5. It took the fleet five months to reach “San Diego.” Because they had taken so long and encountered many hazards, Vizcaíno decided to survey potential ports in detail on the return voyage. Even though San Diego’s natural harbor had an abundance of water, firewood, and game, he ordered basic tasks executed as quickly as possible. The ships, soldiers, and crew, however, needed a rest.

Especially the old Santo Tomás. It demanded a thorough scouring and caulking. Hundreds of snails had attached themselves to the bottom. And oakum had come loose between the joints. “The spewing of oakum,” Sir Thomas Gates wrote in 1609, is “a casualty more desperate than any other” at sea. “Weeping leaks” can split a seam, erupt into floods, and sink ships — a thought that “turned” a mariner’s “blood.”

Many on the expedition were as ailing as the old galleon. “A very severe sickness,” writes Ascensión, “had seized them.” Symptoms had begun several weeks before: aching legs and fatigue. Reddish-blue bruises appeared on the skin. Gums became spongy. Teeth loosened. By the time the expedition reached San Diego, many had anemia, swollen joints, and trouble seeing. Some had died. They received last rites and a seafarer’s burial: cast overboard.

Ascensión offered the standard explanation. Whenever a Manila galleon reached the California coast, usually near Cape Mendocino, the “severe sickness” would appear. “Scarcely a man escapes from suffering greatly from it.” In some instances, there was “hardly a person left to manage the sails or bring them to the port of destination.”

The cause, Ascensión believed, was the weather along the coast: “A very sharp, subtle, and cold wind blows, which passes through thin men. It must carry with it much pestilence.”

Instead of an airborne plague, the crews were coming down with scurvy. Many had “purple spots larger than mustard seeds” below the waist. Their legs became so stiff they couldn’t walk. Then bodies became “sore as a boil.”

Accounts of Cabrillo’s voyage make no mention of scurvy. From San Diego onward, Vizcaíno’s chroniclers speak of it more and more, and, finally, of little else.

Captains Alarcón and Peguero, and Father Ascensión, along with eight armed soldiers, rowed ashore to the beach below Point Loma. They climbed the “little mountain” that sheltered the bay from the north wind and found, writes Ascensión, “many live oaks, junipers, and other trees such as rock-rose, heather, and one very similar to the rosemary.”

Ascensión speaks of trees on the leeward side of Point Loma, and later, of snow on the ridges of Big Sur. Though Ascensión is accurate elsewhere, many historians have doubted these observations. But the climate in 1602 was quite different from today. Between 1550 and 1850 CE, the world was experiencing a “Little Ice Age.” Temperatures in the Northern Hemispheres were much colder. Vegetation had to be hardier.

From the top of the hill, an expansive bay spread out before them: “good, large, and safe, as it was protected from all winds.” The hills were shades of beige and yellow, spotted by clusters of green shrubs. “Fine meadows” lay beneath them, “very fertile and level.”

To the north, much to their surprise, they found another potential harbor: today’s Mission Bay. The sights, blue expanses of water on both sides, made them eager to report their findings.

When they returned, Vizcaíno had set up camp, including a large tent for a church. He posted sentinels. The men went about their labors, encouraged by the positive signs. Pilots and seamen worked on the ships.

The Santo Tomás had splitting seams that required constant pumping. Carpenters and caulkers lit lanterns and candles. They crept from rib to rib along the ship’s noxious-smelling innards. They inspected every joint. They listened for the sound — even the slightest seep — of running water. Using mallets, they hammered hemp into the wedge-shaped seams. They used tallow as a sealant.

Scouts found water across the channel on a “large sand-bar” (North Island). They dug holes the size of graves. Ascensión proclaimed a miracle: “When the tide was high the water that trickled into them was sweet and good, and when the tide ebbed it was brackish and bad (a secret of nature and the work of the hand of God).”

Near the camp, a sentinel spotted at least 100 natives coming up the beach. Naked, painted with bluish-black-and-white stripes with plumes of feathers on their heads, they shouted “noisily.” But when soldiers readied their arms, the cries ceased — the natives aware of what an arquebus could do.

As he approached them, Father Ascensión threw sand in the air and waved a white cloth: signs of peace. Those nearest gave him their bows and arrows. He returned the favor with bead necklaces and ribbons. Ascensión encouraged them to meet Vizcaíno, the general’s son Juan, and Captain Gómez of the Santo Tomás. But seeing the many armed soldiers, only four did: two men and two “very wrinkled” old women.

Vizcaíno, eager to impress, wore his general’s outfit: ornamental braid on the jacket, mulberry-colored breeches adorned with fringe. With regal gestures he gave the quartet strings of glass beads and biscuits. Sailors cast a net into the channel and offered the catch. A crewman had shouted, “¡Vamos a pescar!” — “Let’s fish.” In the days that followed, natives around the camp shouted, “a pescar!” They returned the favor with otter pelts, small fishing nets, and netlike bags.

When they grew more comfortable with the general, one of the chiefs said that bearded people, dressed like Vizcaíno, had been inland. They were probably one of the early Spanish expeditions. But Ascensión feared otherwise. They were “foreigners,” he was certain, “Hollanders or English,” who had found the Strait of Anian: the Northwest Passage that allegedly connected the Atlantic and Pacific oceans. If such a waterway existed, it would shorten the voyage to California by half.

Ascensión overlooked geopolitics. If the intruders were from Holland or England, he said, the king of Spain must send an army at once to “expel such dangerous enemies, lest they contaminate the Indians with their sects and liberty of conscience.”

On November 15, Vizcaíno took a landing party on the frigate to sound the bay. The chief cosmographer, Geronimo Palacios, couldn’t go. He was ill.

They rowed at night. Lanterns lit the flood tide. At dawn, six leagues into the bay, they saw the full extent of their discovery. The king of Spain wanted a safe harbor for Manila galleons heading south to Acapulco. Nothing the expedition had seen thus far came close. San Diego was “large enough for all kinds of vessels, more secure than at the anchorage, and better for careening the ships, for they could be placed high and dry during the flood tide and taken down at ebb tide, even if they were of a thousand tons.”

The more they saw, the more the bay must have resembled Cabrillo’s “San Miguel.” But Vizcaíno had the ambitions of a conquistador (many accused him of wanting to be the next Cortés). He overlooked what must have been obvious: Cabrillo mentioned no port the size of San Miguel south of San Miguel. Nonetheless Vizcaíno acted as if he were the first non-native to discover the splendid natural harbor.

Natives approached at a distance. They kept away, even after signs of peace. Then an ancient woman, dressed in animal skins, emerged from the group. She appeared, writes Vizcaíno’s diarist, “to be more than one hundred fifty years old.” The woman, who had “wrinkles like a blacksmith’s bellows,” was weeping.

Why, they never knew. Did she remember Cabrillo? Or know of violent conquistadors inland? Or was she witnessing the end of something. She never said.

Vizcaíno offered her beads and biscuits. Her tears ceased. She gave him pelts of small animals and invited the landing party to her village, its thatch-domed houses not far off. The general had vowed not to harm or interfere with the natives but had already broken that promise once. He said good-bye to the ancient woman, returned to the frigate, and sailed to his flagship the next night.

On November 20, stocked with water, firewood, and fresh meat, the three ships left “San Diego.” The Tres Reyes explored the bay to the north. Ensign Sebastián Melendes later told Vizcaíno that a sand bar, just two fathoms deep, crossed the entry. He saw a large grove of trees along an estuary to the east, and so many natives he didn’t go ashore. Melendes didn’t think the “bay of the narrow entrance,” unprotected from the wind, was worth sounding. One hundred seventy years later, it came to be known as “False Bay.”

The Tres Reyes rejoined the fleet near Encinitas. The northwest wind, writes Ascensión, “king and absolute master of this sea and coast, commenced its work anew.”

As did the curse of scurvy. Men began dying in greater numbers. By the time the fleet reached Monterey Bay, which Vizcaíno named after the viceroy of New Spain, “there was scarcely one who could say he was entirely sound and perfectly well.” ■

One of the best of the Reader. Too bad there aren't more readers!