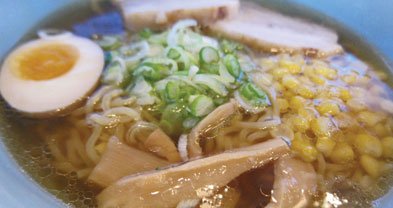 Have you ever run into a ramen-maniac? And how would you know? It’s pretty simple: Query the suspect with a simple question regarding ramen, and you’ll hear an amazing amount of ramen-based jargon and slang. You see, in the world of ramen-mania, the noodles aren’t al dente — hell, no. Noodles are katame (firm), futsu (normal), yawarakatame (soft), barikata (extra-firm), or even harigane (the firmest of the firm). And that’s just noodles. It’s enough to send my ramen-loving head into a spin. Interested in more? Check out Rickmond Wong’s food blog “Rameniac.” You may find yourself sucked into the world of ramen-mania. Just don’t blame me when mom gets furious after you declare her chicken soup too kotteri (thick/rich) or assari (light).

If this were 2007, I’d never have even considered writing this. The state of ramen in San Diego at that time was, in my opinion, rather bleak. In the spring of 2008, Santouka Ramen opened a shop in Kearny Mesa’s Mitsuwa Marketplace food court. It is a chain, and yes, you’ll usually find Santouka is in a food court. But this is not your average eat-on-Styrofoam, same-chicken-different-sauce mall-rat food court. Here, there’s no take-out, and even though everything is still loaded onto one of those handy-dandy plastic trays, food is served in proper bowls. The broth at Santouka is tonkotsu, in which pork bones are boiled rapidly and reduced for hours. The result is a rich, milky white broth. This style of soup originated on the Japanese island of Kyushu, in a district of Fukuoka called Hakata. The city of Asahikawa took a page out of the book of Hakata-style ramen and created its own style, and this is where Santouka was born. I think much of the richness and thickness of Santouka’s broth lies in its roots. Asahikawa is known as “the coldest city in Japan”; the coldest temperature ever recorded in Japanese history, -41C, was taken there in 1902. You’d need a hearty broth to survive at that temperature! The amount of fat in the soup means that it has to be served at a tongue-blistering heat, never boiling but hot enough to make you wish you had Teflon lips. Let it cool, and it’ll develop a “skin.” The soup edges on the salty side, and the only broth for me is, ironically, the shio (salt). The missus enjoys the miso flavor, but I find anything other than the shio broth too salty. The noodles are short, curly, and present a nice chew. You’ll find several different combinations of ramen and sides presented. The only way we ever get our ramen at Santouka is tokusen toroniku. Order your ramen this way, and all of the garnishes and toppings are presented on another plate. But that’s not the best part — instead of the regular chashu (the wonderful braised pork that accompanies ramen), toroniku (fatty pork) is made from braised pork cheeks. I’ve been told that the reason toroniku is served on the side is that too long a dip in the hot broth and the fat would render, causing the pork to fall apart in the soup. I’m sorry to say I’m unable to confirm this, as the pork residing on my plate has never made it past a quick dip. Such decadence does not come without a price. The toroniku ramen rings in around the $10 range, and the portions at Santouka are rather small. Still, due to its richness, I find it hard to finish a regular bowl. At times, the missus and I have shared a large bowl.

As much as I enjoy Santouka, it’s not my ramen choice for the other six days of the week, due in part to the richness and price. I was overjoyed when Yakyudori Yakitori and Ramen opened in January of last year in Kearny Mesa. At first glance, the broth at Yakyudori seems straightforward and simple. But taking a careful sip, you’ll notice a mild tongue-coating richness, a light sweetness with a lingering savory finish. I prefer the shio and shoyu versions at Yakyudori. The chashu is usually tender, and the half a marinated boiled egg has always been perfect, the yolk a golden shining orb that calls me to devour it right away. I’ve noticed a bit of inconsistency with the noodles here. When Nabe-san, the owner, is present, it is always spot-on. When he is absent, it’s a bit of a crap shoot. There are several other versions of ramen available at Yakyudori, even a tonkotsu which is served only for lunch. It’s a bit too light for my taste, but if you want to get your butter-corn tonkotsu craving satiated, this’ll be the place. Yes, butter and corn are available among other items as add-ins for your ramen.

I recently had the pleasure of sharing a meal with San Diego’s own ramen-maniac, Dennis, whose eating exploits you can follow on his blog, “A Radiused Corner.” This time it was ramen from Gunco Ramen in Chula Vista. I had not been too impressed with the ramen there on previous visits. And while I still am not keen on the assari (Dennis calls it “healthy”) broth with very strong ginger tones, the noodles were spot-on. The chashu was a tragedy — dry, crumbly, and bland.

There are two other shops that are often mentioned by friends and acquaintances. Tajima Japanese Noodle House is one. The ramen consumed there has varied wildly — sometimes too salty, on occasions watery and bland — but if you’re jonesing for late-night ramen on Thursdays, Fridays, or Saturdays, you can get your fix from 10:30 p.m. to 3:00 a.m. Izakaya Masa in Mission Hills serves Hakata-style ramen on weekends from 11:30 a.m. until 3:00 p.m. and daily after 9:00 p.m. until 1:00 a.m. The folks running Izakaya Masa are from Fukuoka, but I find the Hakata-style ramen here falls short. The tonkotsu broth is thin for my tastes, with a strong metallic aftertaste, and the noodles are usually served much too soft with regards to Hakata ramen standards. After quizzing my friends, I noticed that the words “impaired, buzzed, and after a couple of beers” were in almost every endorsement of Masa. Still, I love the vibe of the little shop.

After our ramen lunch at Gunco, Dennis, recently returned from Japan, handed me my omiyagi (gift/souvenir from a trip). It was a ramen sampler from the Shin-Yokohama Ramen Museum! What else would a ramen-maniac give?

I am so happy to see you writing for the San Diego Reader and I really liked your article about ramen and found it very useful for future reference.

Specifically, I love to learn about the different styles of of a niche (cult?) cuisine and then, you provided the added plus of helping the English speaking person how to order in a competent way instead of just hoping they know what the gringa (or should I say gaijin?) is trying to say.