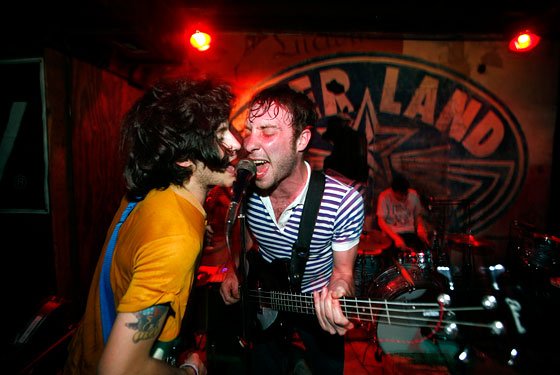 Thursday 9
“Flower-punk” four-piece the Black Lips will lay a big wet one on Casbah. The Atlanta band was lumped last decade with the likes of King Kahn and Jay Reatard as leaders of the garage-punk genre. On Tuesday, the Lips released their sixth studio set, Arabia Mountain. A vid for lead single, the Mark Ronson–produced “Go Out and Get It,” is up all over the interweb, so, go out and get it. Low Volts, Personal and the Pizzas, and Cerebral Ballzy bounce in first for one hella four-course rock-roller and quite probably the gig to get to this month.... Best of the rest Thursday night has country skrunks the Farmers, who will follow Stone River Boys at Belly Up. You know who the Farmers are, but didja know that SRB features Dave Gonzalez of the Paladins? Gonna be a hootenanny.... Uptown, Soda Bar sets up Canada band Mother Mother. The indie-rock quintet is out to tout this year’s Eureka...Bar Pink plugs in SDMA-winning hard-rockers Lord Howler...and if you like your barroom rock with a shot and a beer back, Behind the Wagon rolls into Eleven with Dead Engines and rock-n-soul SanFran band Hypnotist Collectors.

Friday 10
Stanley Cup finals are at the wire — Bruins v. Canucks, for you hockey-challenged mooks — so, what better time to welcome back Barefoot Hockey Goalie. Darius lives! BHG will bring their rock-opera badassery to Eleven Friday night. You like the idea of pop-rock Zappa, get with this set. By the time they finish with “Fresh as a Daisy,” you will be hooked and happy you did. They are, or once were, “without question,” poet laureate of the barflies Edwin Decker’s “favorite local band.” He said so right here: accretions.com/press/fediks.asp. Once upon time, me too, Ed. See you there.... 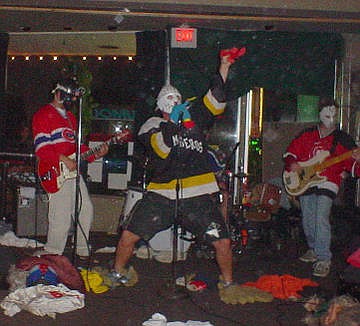 For the rest of you: Pocket’ll be laying down their jazz-funk junk at Bar Pink...L.A. country-punk perennials X meet SD’s favorite beer band Joey Harris and the Mentals at 4th&B...around the bend at House of Blues, pop-punk’s the soup of the day, as Good Charlotte and Yellowcard take the downtown stage...local lo-fi Dudes, No Paws, Ghost Shores, and U.S. ’11 fill a bill up the hill at Tin Can Ale House.... And Dave Wakeling and his English Beat set up for a two-night skankathon at Solana Beach hot spot Belly Up Tavern. Tommy Dubs goes first on Friday. Fabulous Rudies set it up Saturday.

Saturday 11
From Columbus, Ohio, fuzz-pop trio Times New Viking sails into Casbah behind their new set, Dancer Equired, their first for indie stalwart Merge and a step in a less dissonant direction. 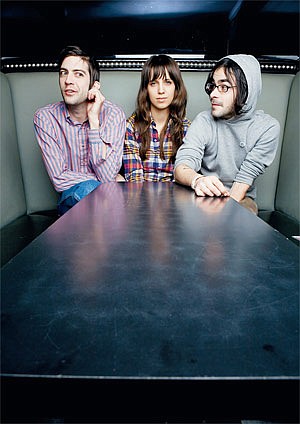 Across the blogosphere, the TNV kids are taking crit hits for cleaning up the bleed. “Though revealing, this probably wasn’t the right set of songs to unveil in the process.” Pitchfork’s become, like, the Bill Lumbergh of music reviews. Milt, we’re gonna need to go ahead and move you downstairs into storage B. We have some new people coming in, and we need all the space we can get. So if you could just go ahead and pack up your stuff... The band’s body of work is too big to bury, and they crush it live. Go.... No? Stephen Rey and the Slicks slide into Tower Bar behind Diablo Dimes and Low Volts for one greazy threeway...L.A. alt-rock quintet Airborne Toxic Event hits House of Blues behind this year’s chart-rocker All at Once...“Boom Boom” Pat Travers will turn out the lights at 4th&B with Graham Bonnet’s Alcatrazz...Brick by Brick stacks up some industrial-strength metal, as Fear Factory plays a makeup date with Pin Hed and Helsott...Weezer teasers Geezer don the duffer duds at Ruby Room after Rocks Off apes the Stones and Full Moon Fever does some freeeee faaallllinnn...skate-n-rods punk-rock stop the Shakedown’s going to host a surf night set to tiki motif with big-screen beach flicks and Secret Samurai and Batar-Zan surfing fat strats fulla hula. Shaka-bra!

Sunday 12
Sibs Joe and Paul DeGeorge of Norwood, Mass, spawned “wizard rock” as Harry and the Potters, a sorta psychedelic new-wave take on the kid-lit-and-flick empire. Their hometown weekly the Boston Phoenix called the Potters the “Pink Floyd of Potterdom.” Dig “Save Ginny Weasley”: myspace.com/harryandthepotters. 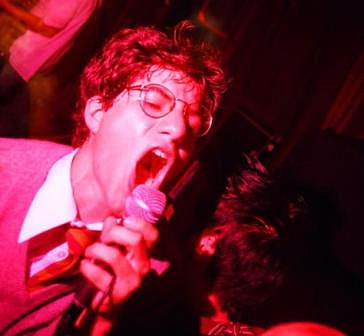 Harry and the Potters at Ché Café

The Potters will ride their Nimbus 2000s into Ché Café on Sunday.... Else: proggy Memphis throwbacks the Young Widows visit Soda Bar. Will Crain broke this one down in this week’s “Of Note,” so flip or click to that for the particulars...second-wave ska bands King Hammond and the Ghetto Penguins waddle into Brick by Brick...while pianoman Irving Flores will play a tribute to classic jazz cat Chick Corea at Dizzy’s downtown.

Monday 13
It’ll be bluesman Buddy Guy at Belly Up Monday night. The 74-year-old slinger’s ranked 30th in Rolling Stone’s “100 greatest guitarists of all time.” Prolly why this set’s done sold out.... The Anti-Monday team at Casbah bills the Brothers of Brazil. Brother Supla is all rock (punk, classic rock), brother João is all Brazilian (samba and bossa nova). They call it “samba rock.” I like “punkanova.” And I like rootsicana openers Blackout Party. This should be a fun one, Monday-nighters.

Tuesday 14
Desert punk trio the Meat Puppets play Casbah on Tuesday night. Dave Good got to talk to one of the Kirkwood boys about their 13th studio set, Lollipop, for this week’s “Of Note.” Suggest you flip or click to that for the skinny on the gig.... 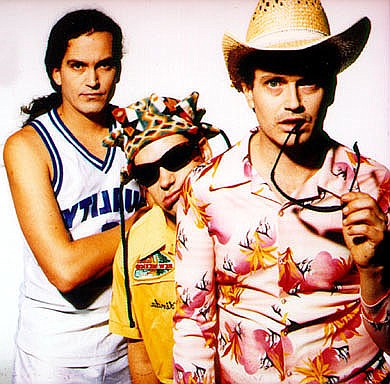 The Meat Puppets at Casbah

And from the other end of the ’80s pop spectrum, the goth-gaze end, Brendan Perry of Dead Can Dance and Cocteau Twins’ Robin Guthrie split a bill at Belly Up.