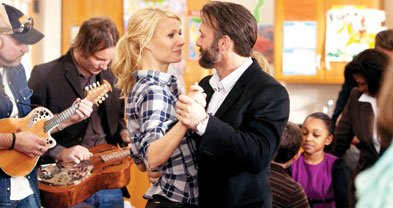 The Redneck Hipster of Country Strong

Riding into town a day late and a dollar short, ready to review the big releases from last week. Howdy, folks. I’m staff writer Matthew Lickona. You may remember me from such Reader columns as “Crush” or “Sheep & Goats.” But today I’m gonna let regular critic David Elliott take a load off here in the movie department and see what’s what about a couple of recent offerings.

Country Strong is not the film I would have picked for my first solo outing as a Reader film critic. That’s because, as a rule, I don’t think it’s helpful to consider an actor’s personal life when reviewing a film. But how can such a rule hope to stand when the actor is Gwyneth Paltrow, a woman who has made her personal life — or at least, her lifestyle — into a public brand, sending out weekly newsletters (under the title of Goop, no less) that encourage readers to “nourish the inner aspect”? This isn’t just Brangelina adopting their own personal rainbow coalition or Sean Penn camping out in Haiti. This is Gwyneth & Co. advocating a way of life. “Friendship divorce.” “Six different perspectives on what it means to be grateful for Thanksgiving.” “Having it all as a diva country singer and then drinking it all away, including losing your baby after falling off a Dallas stage while pregnant and drunk off your tuckus.” Wait, what? Oh, hi there, Country Strong.

Yes, Ms. Paltrow played Pepper Potts in Iron Man — just for kicks. But Country Strong is not a kicky film. What’s she up to here? Maybe reconnecting with Real Americans after she was accused of saying that the British were much more civilized? Not so much: the film lets us know what it thinks on that score early on, when Paltrow’s Kelly Canter, drunk during her first post-rehab concert, comes totally unglued just as a couple of gigantic American flags unfurl alongside her blown-up Jumbotron image. Toss in all the potshots at commercial country music taken by earnest young crooner Beau Hutton (Garrett Hedlund in a patchy beard), and you’ve got something closer to a middle finger than a conciliatory handshake. The message comes blaring in over the cheers from the crowd: You people with your ecstatic screaming fits over gussied-up divas who rhapsodize about the simple joys of double-wide trailers, you’re all a bunch of phonies.

True country is, as Hutton reminds us, a small-town bar with “a bunch of hard-working people who like to listen to good music while they drink their beer.” The man is a redneck hipster — he liked the genre better before it sold out. He’s also the real star of the show.

Paltrow’s performance as Canter is something else to watch, especially when she’s dancing her excruciating two-step of a marriage with her manager, played with surprising feeling and restraint by country giant Tim McGraw. She lives for the crowd (or used to), he lives to put her on stage, and they keep on keeping on, feeding off each other’s need despite the destruction, the betrayal, and the heartbreak. None of it means anything anymore, and they both know it, but they just can’t stop. (It’s the kind of tender, awful predicament you might hear about in a good country song.) But, as stars go, she’s the falling kind. Burned too fast and too bright and all that.

Beau Hutton, on the other hand, he’s the real deal, strong and steady, rattling off bits of youthful wisdom such as “Fame and love can’t exist in the same place.” He is Country Music’s heroic conscience, calling it back to its more authentic past (“Patsy Cline played here!”), urging it to recover its old, honest, hardworkin’ self. He is, finally, a Goop newsletter piece on Down-Home Authenticity, the truck-driving medium for Paltrow’s message about nourishing the inner aspect.

Except he really isn’t. Really, he’s kind of a jerk. “No one’s ever been more deserving of love,” Canter tells him, but it must be the booze talking, because I have no idea what she means. Yes, he stops sleeping with Canter, but only after she makes him feel icky by lamenting her rotten marriage. Then he barely pauses before moving on to a Sweet Young Thing (Leighton Meester) with her own dreams of stardom. Then he’s an ass about it. When she comes to his door in a fit of desire, he half shuts it on her, again and again, ordering her to say exactly what it is she’s after. Nice way to treat a lady. His big song? “Give in to Me.” A country booty call — how authentic.

That’s the biggest problem with Country Strong. Its hero just isn’t much of a person. On top of that, he doesn’t do much suffering, or struggling, or changing — the sort of thing that makes for an interesting character, whether he’s on a screen or in a song. Hutton pouts some, and frets some, and gets mad when Canter whores herself out to someone else. But we never see him bleed for anything or anyone. There’s nothing noble about him, and so nothing he does is either triumphant or tragic. He’s a good-looking kid who likes music, sex, and beer. The kinds of things you hear about on commercial country radio.

Season of the Witch

The Crazytime Scary-Fun Whippity-Ride that is Nicolas Cage’s career careens onward, this time sending the viewer lurching through an unholy mashup of Ingmar Bergman’s Seventh Seal and those madcap Bob Hope–Bing Crosby road movies from the ’40s. Call this one Road to Severac Abbey. Yes, you’ve still got the disillusioned crusader returning to plague-stricken Europe, but this time he’s got a sidekick (Ron Perlman) with whom to trade quips about who’s buying drinks after the cataclysmic battle with the forces of evil. Another difference: instead of a chess game with Death, our knight plays a desultory round of “Is She a Witch?” with the pretty girl (Claire Foy) he is transporting to trial — a game that might have been more fun if we hadn’t been shown at the outset that a) yes, witches exist in this film, and b) our accused ingénue is possessed of superhuman strength. Something ain’t right. Finally, instead of uncovering any kind of ultimate wisdom about the mysteries of life and death, Sir Cage is after a magic book containing the wisdom of Solomon, a book that can arm the pious against the devil. Handy!

Shallow claims about faith (“A benevolent God would not ask such things!”) get lumped in with garbage grandiosity (a greasy fog is “like a veil before my eyes”) and then piled on top of boring stop-start camera work that renders the various fight scenes unintelligible. The costumes, however, are lovely.

It didn’t have to be this way. If everyone onscreen were having as much fun as Perlman or exuding as much sincerity as Stephen Campbell Moore’s faithful priest, we might have been convinced to play along. As it is, Season of the Witch is noteworthy only because it’s not the only movie about the conflict between a knight and a woman accused of witchcraft during the plague years set to be released this year (Black Death is due in March).

Matt, two good reviews IMHO. I'd love to see you as the regular movie critic instead of Elliott.

I love how this reviewer starts out with what a professional reviewer would do (not use a personal opinion about an actress when reviewing a film) and does the opposite. "I know it's wrong but I'm not clever enough to review the film without taking the easy way out." Not only is it unprofessional but it is extremely sexist - why does it matter than Gwyneth does in her personal life? It almost never comes up for men. Review the film please - do not bring your own biased opinions into the article!

Please bring back Elliot!!!!! This guy has got to go!

Dear Mr. Randolph: Good news. Mr. Elliott will be back next week. For the record: I didn't say that a professional reviewer would not use a personal opinion about an actress when reviewing a film. I said that as a rule, considerations of an actor's personal life are not helpful. But to my mind, this case proved an exception: the personal life/public brand of Goop (as opposed to, say, the personal romantic life) helped to explain the character of the film. No mention of personal opinions. (An aside: it almost never comes up for men? Check the reviews of Mel Gibson's work post-meltdown.)

Ha! Spewing hate and beating a woman is hardly comparable to writing a lifestyle blog! One is illegal! And I guarantee he will be working steadily in the next few years - we are very forgiving of men in the media - Mike Tyson had a nice cameo in the very same film that didn't want Mel - just give it time. TO compare Mel and Gwyneth is truly idiotic. Unless blogging is now criminal - maybe we should arrest you? And with your logic actors should only be playing roles that they are similar to in real life. Sorry Anthony Hopkins - you are not at all like a serial killer in real life therefore you should never have been in Silence of the Lambs. Actors should just continually play themselves and not take any risks. Got it.

Um, there was no comparison of Gwyneth and Mel, but rather, an argument against your claim that male actors rarely have their personal lives mentioned in considerations of their work. And no, I never suggested that actors should never play against their own personas. What I wrote was that the Goop stuff helped to explain the character of the film, not Paltrow's own character. And I offered no opinion on whether or not that was a good thing. My biggest problem was with Hedlund's character, not Paltrow's.