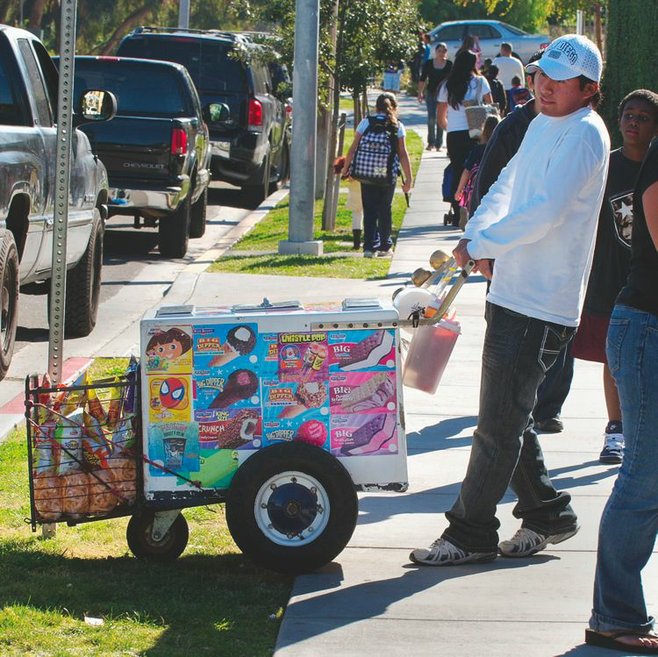 At the sound of a dinging bicycle bell, the children at Lulu’s Montessori in City Heights run to the screen door overlooking Van Dyke Avenue and shout, “Bolis! Bolis!” For some of the tiny tots in their navy blue uniform shirts, bolis is one of the few words they know. In English, it means ice pop, an innocent word in almost any context, but in this neighborhood, the paleteras — those who sell the bolis, also known as paleta, from pushcarts or vans — are at the center of a community debate.

“My friends and I are used to the paleteras from growing up in Mexico,” says Lulu Quiros, proprietor of Lulu’s Montessori. “But we were surprised to see them in the U.S.”

It’s a hot afternoon in early November, and Quiros and her coteacher, Denisse Heredia, share a bag of churros con chile y chamoy purchased from a neighborhood paletera. The children gather around the women, pestering for a taste of the snack. “Me!” they call, and “I want!”

A few blocks away, at the corner of Swift and University, stands My Back Yard Nursery, Art and Garden Center whose owner, George Billingsley, is president of the City Heights Business Association. The association administers both the maintenance assessment district and the business improvement district in City Heights, deciding how district fees assessed business and property owners will be spent to benefit the community. Since last July, Billingsley has made it his mission to bring illegal street vending to the attention of City authorities. His list of complaints is long.

“We see these people all the time, selling out of these carts. We don’t know exactly what they’re selling. They claim they have health permits, but they have no permits. They have no business licenses,” he says. “It’s unfair to the businesses in City Heights — and in San Diego, for that matter.”

Billingsley’s crusade is not limited to paleteras. He believes that “chronic yard sales” and “any type of selling that isn’t licensed” need to be eliminated from the streets of City Heights.

To this end, he has contacted city councilmembers, the City’s Department of Neighborhood Code Compliance, the district attorney’s office, and the police.

“The police department says their funding is cut, and they apologized, but they thought this was not going to be such a priority,” he says. “But it’s really not a police action unless it interferes with the law and public safety. It’s a Neighborhood Code Compliance action.”

Billingsley has stated his case at meetings, over the phone, and in letters. But so far, he has been disappointed by the lack of enforcement.

“We had a big meeting downtown at city hall in August,” says Billingsley. The meeting was convened to address code compliance issues in City Heights. Councilman “Todd Gloria was there and a representative from Marti Emerald’s office. We had all kinds of attorneys. The police were present — Captain McKinney. We had representatives from all different groups that were there and trying to get some kind of solution for this situation. But the very people in charge of enforcing these codes and ordinances weren’t even at the meeting.”

Billingsley adds that the meeting did produce one satisfactory result. Captain McKinney promised to help educate the pushcart vendors about the laws.

In late September, Billingsley sent a list of “addresses that were chronic with yard sales and where illegal vending of all sorts takes place on a constant basis” to Councilman Gloria’s representative for City Heights, Courtney Thomson. Other community members, he says, also submitted lists.

“This is my stance,” he told me over the phone in early October. “I want to see some noticeable decrease in this activity by the end of this month. And if I don’t, as president of the City Heights Business Association, I will organize the businesses to stop paying their fees — business license and business improvement fees, health licensing fees, and certain insurances. It’s not fair for [business owners] to pay fees while others are selling our products and not paying fees.”

The Friday before Halloween, it seemed to Quiros that Billingsley had gotten his way. Around 3:40 p.m., Quiros stood in front of Florence Griffith–Joyner Elementary School on the corner of Van Dyke and Myrtle, waiting to pick up one of her day-care charges. She saw a white pickup truck driven by a police officer and followed by a police car. In the back of the truck sat a paletera’s cart, and in the back of the police car sat the paletera. Both vehicles slowed as they approached two nearby vendors who sell regularly on that corner.

“The last thing I saw,” says Quiros, “was that the police stopped and called out to the two other paleteras. I don’t know what happened next.”

The San Diego Police Department could not comment on the incident, and representatives from Neighborhood Code Compliance were not available to confirm whether Billingsley’s threats had spurred the office to action.

On Thursday, November 4, Billingsley stated, “Even though I see a slight improvement, I don’t want [the City] to become apathetic and think I’m satiated.” He went on to say, “If I don’t continue to see some real clampdown, I’m going to go to the news media, such as Channel 10, 51, that have a nice public forum. In doing that, it will coerce the City into action. And it will be quite embarrassing.”

Quiros, Heredia, and Iris Perez, the parent of one of Quiros’s students, speculate about what the neighborhood would be like without the paleteras.

“It would suck,” Perez says. “It would be like if they tore down your favorite store.”

The other women agree that these vendors have a special place in their hearts. It’s not just the convenience of purchasing Tostitos or paleta de agua de sandia right outside their door. It’s about the neighborhood’s culture.

“I’ve been buying stuff from them since I was little,” Perez continues. “I even used to want to be a paletera because of them.”

“Without them, I would feel…” Heredia pauses, and then screams, “empty without my churros!”

The others laugh. Perez says she often drives around looking for a paletera.

“Sometimes, I just feel like their stuff is better,” she says. But at the same time, she admits that the churros con chile y chamoy that she and the others eat now are a bit stale.

A block away, a crowd of children and parents gathers in front of a blue van whose side is covered with stickers and ads for frozen treats. At the sliding side door stands a pregnant woman in a straw hat taking orders and money, while a man inside the van passes out goodies. The woman’s name is Rosy. When I ask if she has a health permit, which is supposed to be posted, she says she does but won’t show me because I have no official identification proving the authority to ask for it.

Janet, one of Rosy’s longtime customers, says she frequents the paleteras because they’re convenient and they have what she wants. She claims to be unconcerned about health permits. Rosy, she says, doesn’t sell food that is already open or whose expiration date has passed.

“I don’t care about licenses,” Janet says. “What matters to me is that all the food packaging is closed. I don’t buy anything that’s made on the streets.”

Quiros says she, too, purchases only prepackaged items.

“That’s all most of them sell,” she says. “I once saw a lady selling tamales, but that’s someone different. That’s not a paletera.”

On the other hand, Mick Rossler, owner of the Tower Bar, at the corner of Euclid and University, says he doesn’t need the items that paleteras sell. But he did recently buy an ice cream from a vendor who had pushed his cart all the way to the bottom of the dead-end street where Rossler lives.

“I felt bad because it seemed like a long way to walk to sell one ice cream,” he says.

But Rossler wouldn’t have bought the treat had it occurred to him that the vendor might not be licensed.

“When I think about all the fees and taxes that businesses have to pay, it doesn’t really seem fair,” he says.

Because of health issues, Billingsley has been unable to follow through on his plans to force the issue with the City. In late December, he said that he believed the “problem has gotten worse. Mike Richmond and Leslie Diamond [of Neighborhood Code Compliance] have done absolutely nothing.”

One exception is that “the pushcart vending has all but ceased,” he says. “I commend Captain McKinney for that. But trust me, that is the only thing that has changed.”

Lulu Quiros hasn’t seen many pushcarts lately either but says, “It could just be the weather, I think.”

At least she hopes it’s just the weather that’s keeping the paleteras quiet. Quiros says she understands why Billingsley and others would like the law enforced.

“As a business owner, I get it. In Mexico, [street vendors] don’t need licenses. But we live in the U.S., and we have to follow the rules they have here,” she says. “As a community member, though, I love the paleteras because they make us feel like we’re at home.”

Until it’s no longer an option, she will continue to buy her churros con chile y chamoy from the paleteras of City Heights. ■

it should be paleteros not paleteras. one, most of the venders are men, and two, in a mixed gender group the masculine form of the noun is used. (think, los ni~os, for children)

I can't believe the paleteros did not simply tell the cops, "We don't need no stinkin'badges."

What's the solution to people trying to bootstrap themselves up from poverty? Why, arrest, fine, confiscate, and throw them back onto the streets to beg, borrow, steal, or cut my un-gated neighborhood's throat to survive--there's no room in the jails, you have to hand a bank-teller a demand-note to get it that good. And, of course, fill the "sanitary" landfills with their carts and other meager possessions.

King George III was kinder and gentler; even he didn't extinguish the thousand points of light--then there was even The Commons.

SO what else is new. The assault on the poor has been happening all my life(I'm fifty something). It wasn't until I reached poverty that I felt the persecution so accutely. Each day I go out into the world confined to a PMV and it seems that my powers of invisibility are just as strong as ever.