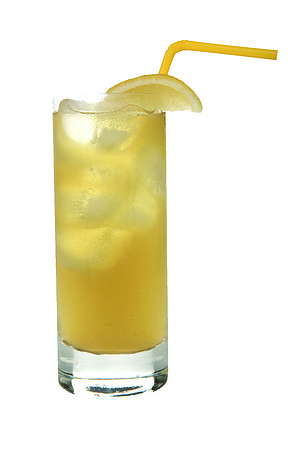 My taste in adult beverages, like my taste in friends, has become more refined with each passing year. In high school, the rule was: drink what you can steal. Flavor was not the point. In college (at least for the three semesters I attended) the rule was: drink what you can afford. Again, taste was a nonissue. After moving into my first apartment, I so loved playing the part of a grown-up that I made up a new rule based on my desire to be taken seriously: drink what you think sophisticated adults drink. At the time, this meant flashy-sounding cocktail classics made with vodka (what I considered to be a very adult ingredient, with the added benefit of having virtually no flavor of its own), like Vodka Collins, White Russians, and Cosmopolitans.

For years, I drank only at parties, bars, or clubs and always for the same reason — to aid social interaction. But the way I viewed the role of libations changed A.D. (after David). My first months of dating the gastronome were rife with new discoveries, including that of one beverage I had never before tasted — port wine. Intent on pleasing his new ladylove with sensuous delights one evening, David laid out a platter containing a glass of fine port, a wedge of blue-veined, aged Stilton, and a few squares of dark chocolate.

With enough insistence, David persuaded me to overcome my reluctance to apply deliberately a known evil — stanky blue cheese — to my finicky tongue. At first, the pungency of the Stilton was overwhelming. But once I sipped the port and closed my eyes, something magical happened — in my mouth, the cheese was transformed into a creamy concoction of salty hazelnut, caramel, and chocolate. Suddenly, an alcoholic beverage was not only a vehicle to a better buzz but also a delicacy in which I could luxuriate.

Because it’s no longer just about the buzz, my greatest drinking pleasures derive from wine paired well with food.

I fancy many types of wine. Since my first kiss of port, I have always viewed the viscous and sweet liquid as a wine best saved for dessert. That is, until I discovered the Porto Blanco.

McCain had Joe the Plumber. Palin had Joe Six-Pack. I’ve got Joe the Sommelier. It was my not-so-average Joe who demonstrated that the nectar I had relegated to the land of finishes could be just as delightful on the flip side of the meal.

When it comes to enjoying drinks as a complement to food, the problem with most cocktails is that they are too filling and too flavorful, bombarding my palate with their sweets and sours. Few are ideal aperitifs, which are meant to stimulate the appetite, not squash it. Joe’s sweet and spicy Chupacabra — a hearty concoction of Stoli Vanil, Kahlúa, horchata, ancho chile, and simple syrup — is too much for me to handle before chef Hanis’s generous portions at Kensington Grill.

David and I have been dining at the Grill since we started dating six years ago. It wasn’t until Joe added the Porto Blanco, a classic beverage of choice in Portugal, to the cocktail list that I realized how consummate the aperitif is to a good meal. In this elegant aperitif, a slice of lemon swims in the combination of luscious white port and lightly sweet tonic water.

As a recent graduate of my 20s, I now prefer my beverages to be as complex and palatable as the people with whom I choose to surround myself. Enjoying a good meal is like having a conversation with the chef who prepared it. Rarely do friends jump right into a rich and heady discussion. So it is that before venturing into appetizers and entrées at Kensington Grill, I begin with a bit of pleasant, effervescent small talk in the form of a Porto Blanco.