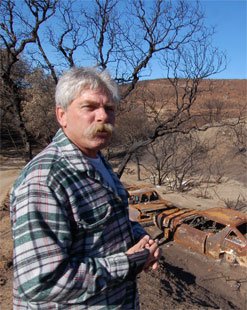 Harris Fire gets him in the end

Paul Sommers promised his mother, when she was dying in 2002, that he would wisely invest the money she was about to leave him. After she died, he began looking for land in East San Diego County. “I found a parcel in Potrero that I liked a lot,” he tells me over breakfast. “But there were quite a few restrictions on how I could use it. For instance, I couldn’t build within 100 feet of the oaks or cross the stream with a new road. So I gave up on that one and began looking for another. But very quickly someone else bought the property. One day I saw that the new owner was grading underneath the oaks and building a road across the stream. A nearby resident told me that, unless neighbors complain, county officials hardly ever check on what people are doing with their property.”

In 2003, Sommers and a partner paid cash for 80 acres at another Potrero location. They wanted to put a large home on the land, accompanied by a guesthouse. The partner had a long-term plan to build the main residence. But Sommers was ready to go. He would proceed right away to build a 1200-square-foot guesthouse of his own design. He wanted to live in it upon completion and grow food on some of the remaining land. Once settled, he would sell a home he has owned in Encanto for the last 21 years.

Shortly after the purchase, Sommers claims that the chief of the local volunteer fire department met him at the gate of his new property. “My son and I had just arrived when the chief rolled up in a brand-new truck,” says Sommers. “This was not long after the Cedar Fire, and he told me that the [San Diego Rural Fire Protection District] was requiring landowners to comply with brush-abatement codes. He asked me if I would clear the trees next to the road that ran through my property. I’m a former Navy fireman, so I understood. But these were the big oaks that nobody was supposed to touch. The chief told me that if I started working right away, I’d get a good jump on it and the agency would work with me.”

But on February 27, 2004, before he made much progress, a company called Fire Prevention Services, Inc., sent him a letter giving him 30 days to clear all brush on his land within 100 feet of structures (a dilapidated shed stood on the property) and 10 feet from any road on or bordering the property. The company identified itself as a “contracted agent for San Diego Rural Fire Protection District.” And it stated that “properties which…do not comply…will be subject to clearing by the fire district at the owner’s expense.”

So Sommers started working in earnest. He bought a used tractor, rented a wood chipper, and got help from friends to complete the clearing. “Do you know,” he asks me, “how much work it is to clear ten-foot-wide, half-mile-long paths of trees and brush on both sides of the road? I was proud of myself when we finished, and I called Fire Prevention Services several times. Nobody ever answered. I then learned from neighbors that people were complaining that the company was overzealously harassing people in the backcountry and that the County shut them down. But not before I spent lots of time and money.”

(Apparently Fire Prevention Services continued contracting with some local fire prevention districts. On May 9, 2007, the California Department of Forestry and Fire Protection wrote to San Diego County concerning complaints it was receiving about the company. The letter suggested that Fire Prevention Services may have been misrepresenting the law and requiring landowners to do environmental damage.)

In the meanwhile, Sommers was preparing to apply for a building permit from the County Department of Planning and Land Use. He says that the department required that he draw up a new plat map of his property and that he obtain an engineer’s evaluation of whether a septic system could be installed. “I offered to pay for removing the effluent from the property instead,” he says, “but they said no.” Eventually the County granted him a permit for the septic system, though he wouldn’t have to install it until the house was being constructed.

“I also had to have good water on the property. So [in early 2005] I built a well, which required an additional permit and cost me $22,300. The County said the well had to have a pressure bladder that would support fire sprinklers inside the house I was planning to build and a fire hydrant at the road,” says Sommers.

To pay for it all, Sommers took out a second mortgage on his home. Otherwise, everything seemed to be going well. Then, in late 2005, county officials claimed that there was no legal access from Highway 94 to Sommers’s property. The road that ran through his land was only a driveway, they said, and he would have to get an easement from another property owner to use it. That property owner, says Sommers, “originally said, ‘No problem, use it free.’ But later, he realized what he had and wanted $20,000 for the easement.”

Worse than that, however, when Sommers finally applied for his building permit, the County informed him that he didn’t own a legal parcel. It turned out that an earlier owner called the Stabler Trust, which in the 1980s had subdivided the land into four parcels, had not followed the requirements of the 1972 California Subdivision Map Act. The law requires that land subdivided into four parcels or more must get a “certificate of compliance” from the county in which they are situated. The law was intended to give counties greater control in areas where they may want to prevent excessive development.

Sommers protested that he and his partner planned only two houses on their land. And why hadn’t the County informed him of the subdivision problem before he’d spent thousands of dollars preparing to build? The County’s answer? Their first discovery of the legal flag on his property came when he applied for the building permit. “What recourse do I have?” That’s the question Sommers said he asked officials. “They told me the only thing I could do was to sue the former owner who did not follow the law when he subdivided his land.”

About that time, Sommers figured he needed a lawyer. So he hired land-use attorney Craig Sherman. “Craig saved me $20,000 right away,” says Sommers. “His research showed that the road running through my property, the one the County interpreted as only a driveway requiring that I get an easement, was in fact Old Stage Coach Road built in the 1800s.”

On January 19, 2006, Sherman wrote to the County of evidence that “legal access is available to the Sommers property via the Old Stage Route [Potrero to National City]…as granted by the County Board of Supervisors since 1872.” On a visit to Sherman’s office, he shows me a response to his letter eight days later. It came from the County Department of Public Works and admitted the accuracy of his research and that there always was legal access to the property.

Sherman was not as successful in correcting the illegality of the Sommers’s subdivision. He first wrote to owners of the Stabler Trust asking that they correct a problem they had caused. That problem, he wrote, “makes use of the [subdivided] properties impermissible until such illegality is cured.” But after promising cooperation, the Stablers have stalled. In the meantime, Sherman filed a lawsuit against them, as the County Planning and Land Use Department suggested. Only he went a step further and included the County as a codefendant. He maintained that the County had a responsibility to enforce the Stablers’ adherence to the Subdivision Map Act. Also, noted Sherman, that law has a provision designed to protect people who buy land that has been illegally subdivided.

Sherman thinks that the County then reversed its course. “Suddenly they talked like they had made a mistake and wanted to work with us,” he says. The planning department’s Jarrett Ramaiya arranged a meeting with Sherman and Sommers for the purpose of discussing the two sides’ differences. Sherman was looking forward to a settlement out of court. But he had to cancel at the last minute and asked for a new date for the meeting. Ramaiya, other county officials, and the Stablers’ attorney met on the original date anyway.

Subsequently, the County decided that, in order to build on his land, Sommers would have to apply for his own certificate of compliance. “That would have cost me a great deal more in fees and penalties,” Sommers tells me. “And two other owners who bought parcels stemming from the Stabler subdivision would have been hit with the same penalty. I couldn’t do that.”

As a result of Sommers’s refusal, on January 7, 2007, the planning department issued its “intention to record a notice of violation.” The violators included the Stablers, Paul Sommers and his partner, and the two other subdivision landowners.

The Sommers lawsuit will come to trial in April. Craig Sherman will argue that in granting Sommers several permits without revealing the subdivision illegality, the County has acted in bad faith. And as soon as Sommers purchased his property, the County Assessor’s Office gave it a parcel number for the purpose of collecting new taxes. Sommers has paid those taxes since 2003. “It raises interesting questions about County assessment practices,” notes Sherman. “Would you assign an assessor’s parcel number to an illegal parcel? Doesn’t assigning the parcel number and collecting taxes on the property legitimize the owner’s stake in a government-recognized piece of property?”

In the meantime, the recent Harris Fire raced over Sommers’s land, burning the shed, several old cars, and a pile of clear-cut oak logs he was saving for firewood. And the bank has foreclosed on Sommers’s Encanto home. After he vacates in another two weeks, he plans to live in a trailer on his Potrero land until he can build.