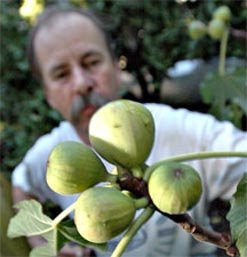 San Diego — Few fruits evoke the sunny blue skies of the Mediterranean and the balmy days of September quite so poignantly as the fig, but local farmers and advanced agricultural science may be turning that image inside out. This year's fig season in the Imperial Valley is expected to run into the dead of winter, and in a year or two you just might find fresh California figs at the market on Valentine's Day.

That's the plan, anyway, of Kevin Herman, a fig farmer from Madera County who planted 240 acres of figs on the outskirts of Niland, in Imperial County, in the spring of 2005. Most of the trees are Brown Turkeys, though Black Mission figs and Kadota figs make up a small portion of the orchards. Herman owns and manages several thousand acres of fig groves in the San Joaquin Valley, where 90 percent of the state's fig crop is grown. Here, blazing hot summers are ideal for fig productivity as well as the subsequent drying of most of the annual crop. However, the deciduous trees abruptly cease producing fruit in early November, slipping into winter dormancy when the temperatures begin hitting the 40-degree range at night.

But in the warmer climate of the Imperial Valley, the season lasts considerably longer, and Herman has found that the fall crop of the hardy Brown Turkey fig can be extended even further into the winter by slightly manipulating the trees' fertilizing, pruning, and watering schedules.

"You can accelerate the timing of the harvest and also slow it down by controlling these factors," said Herman, who farms many of his fig groves organically. "Last year we kept getting ripe figs until late January, and this year we picked figs in mid-May. We're aiming for April, eventually."

Such off-season harvesting would be unprecedented for California fig growers, and as he burns the candle at both ends Herman is marching deep into uncharted horticultural terrain. But not all fig fanatics savor the idea of squeezing out a year-round crop of this ancient Old World staple, and some are simply asking, "Why?"

"It just seems so odd to me to have year-round figs," said Susan Thoen, cofounder of Slow Food San Diego. "When I think of figs, I think of the time of year that they ripen, the warm summer, and just that image has its own really special flavor, but if you have figs every day of the year, what's so special about it? Diversity is wonderful, diversity is inspiring, and to have the same thing all the time -- what's the point?"

"If you could do this sustainably and organically and so they taste good, it would be pretty cool, I guess, but then again, I have a Mission fig tree and I always look forward to the time of year that the figs come -- June, July, and again in August and September -- and it makes it a special time of year. To suddenly have them all year would take away a big part of their appeal."

But Richard Matoian, manager of the California Fig Advisory Board in Fresno, sees a virtue in producing figs in the winter.

"So many of our consumers, like the restaurants and caterers, call us asking for figs in the off-months. Fresh figs aren't really imported, because they're too delicate, so figs may be the very last seasonal commodity. I feel really good that our own growers in California are finding ways to expand the market."

Cultivated for over 10,000 years in the Middle East, figs are beloved in the nations surrounding the Mediterranean Sea and have been praised in ancient literary works, most memorably in biblical scenes. The Spaniards introduced the fruit -- actually a bizarre inverted flower -- to the New World in the 16th Century and to Baja California in the early 1700s. As the missionaries plodded northward, they brought the fig with them, planting small groves at most of their mission settlements. The variety the Spaniards cherished most was a purplish black sort that would become known as the Black Mission fig and that would remain the most common variety of fresh fig grown in California.

Figs are more popular in America than perhaps ever before, assert magnates of the fig industry. In the past five years alone, domestic fresh fig consumption has increased by 60 percent, a demand that California's fig farmers attempt to meet by air freighting their product as far away as New York City and Florida.

Herman sees four reasons for the increase in fig popularity.

"One, they taste really good. Two, they're really healthy for you. Three, when you cut them up and show people that creamy interior with the red flesh and the seeds, they can be really attractive. And four, a lot of people are trying to emulate the European lifestyle of wine and good food."

Yet the state's orchards are disappearing at an alarming rate. In the 1990s, over 20,000 acres of figs grew in commercial groves in Madera, Merced, and Fresno counties. Fewer than 10,000 acres remain today as housing developments encroach upon the orchards. In the Imperial Valley and the surrounding areas, however, the housing crunch poses a lesser threat to agricultural lands, and local growers see a future in figs in the Southern California desert.

In the Coachella Valley, farmer Alan Weeks has bumped up his fig production as national interest in the fruit accelerates. He first began farming figs in the region in 1992, and in 2000 Weeks tore out 40 acres of table grapes and 40 acres of lemons to replant the land with Brown Turkey fig saplings, now in their third year of production as five-foot-tall shrubs. Weeks's Brown Turkey fig trees usually cease producing fruit by mid-December.

Kevin Herman's Brown Turkey fig experiments may be his most progressive, but he is also dabbling with other varieties for other reasons. The Sierra fig, for example, is a new hybrid that Herman believes is a contender for the eventual replacement of the famed Calimyrna fig, which makes up over 50 percent of the San Joaquin Valley's fig acreage and which has long been the favored variety for sun drying.

But an increasing trend of weather idiosyncrasies has been regularly damaging Herman's Calimyrna crops.

"I don't want to say it's global warming," he said. "I'm not a scientist, but the temperature spikes in summer and winter have been getting pretty extreme, and the climate variability and summer moisture are becoming more unpredictable, and all this plays hell with Calimyrnas."

Just two days of damp air, he explains, may cause the fruit's thin skin to split open, exposing the flesh inside to insects and mold, but the Sierra fig has a thick skin that resists the tendency to split during spats of high humidity. Herman is growing several acres of Sierra figs on his Imperial Valley land, and if they thrive in the local climate he may consider expanding production, both in Northern California as well as the Southern California desert region.

Jon Verdick, an amateur horticulturist in Encanto, is also riding high on the rising wave of fig popularity. In the past five years he has collected more than 300 common and obscure varieties, and through his website www.seedsavers.org he sells and ships plantable branch cuttings to interested gardeners, farmers, and collectors. Every November, each of Verdick's fig trees shuts down its natural fruit production and begins to lose its leaves, and Verdick relishes the thought of having fresh figs all year.

"I think that anybody I know who likes figs would love to get them for seven or eight months rather than just two or three. I'd love to be able to go outside in March and pick some figs or buy some at the market."

Since the days of the Spanish missionaries, California has established itself as the fig capital of America and one of the leading producers in the world, ranking behind Turkey, Egypt, Algeria, Iran, Morocco, and Syria in tons produced each year. California supplies the United States with nearly 100 percent of its domestically produced dried fig supply and 98 percent of its fresh figs. The fresh fruits are too soft to endure shipment from southern-hemisphere countries, such as Brazil, during the northern winter, but Herman hopes to supply off-season fruit stands with fresh figs within several years. It was once his goal, he says, to deliver fresh figs to New York City shoppers for Christmas.

"We've accomplished that. Now the goal is Valentine's Day. People associate figs with summer, but watch: you're going to start seeing a lot more figs in year-round supply in California."

Slow Food's Thoen wonders about the integrity of the fig's future in the face of such progressive farming.

"Will figs be just another apple, bagged and waiting rather than being anticipated for nine months and finally available again, that amazing purple lusciousness to grace our tables? That would be really sad."