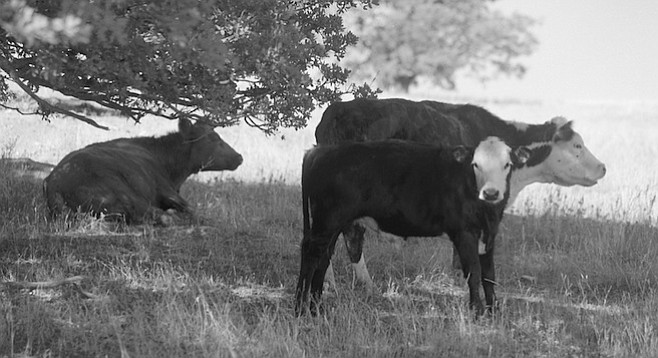 You say you'd like to buy 5000 acres of San Diego County backcountry land, preferably with a perennial stream and rare oak woodland habitat. The Santa Ysabel Ranch has all that and more. The problem is, the Nature Conservancy, a nonprofit conservation agency based in Virginia, has purchased the ranch from Tom and Mary Lou Edwards of Yuma, Arizona, for $9,000,000. But your luck hasn't run out yet. The Conservancy may be looking to resell it to someone like you, with a few preservation caveats, of course. 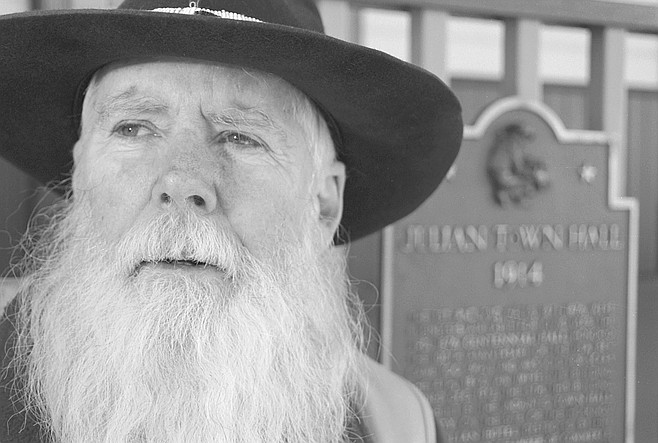 The ranch borders the existing Volcan Mountain Wilderness preserve. "Together," Clint Powell says, "they form a wildlife corridor from the valley, up the mountain, and down to the desert side."

The ranch sits on two separate parcels, one on each side of the Santa Ysabel Valley. The larger east parcel, 3894 acres, stretches from the intersection of Highways 79 and 78 near the town of Santa Ysabel up the side of Volcan Mountain touching Farmers Road at its eastern extremity. The west parcel, 1512 acres, sits in the rolling oak grasslands north of Highway 78 on the other side of the valley. 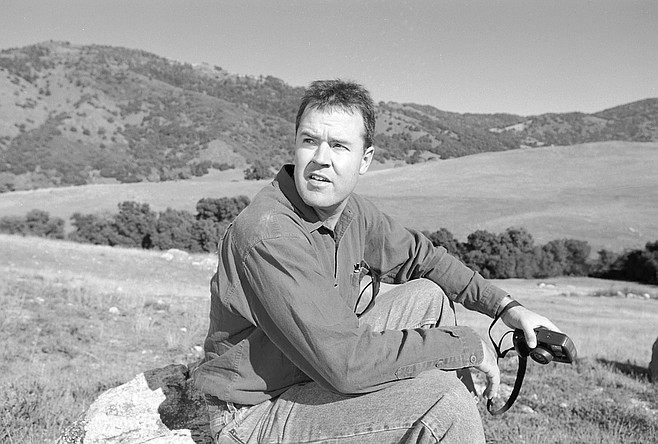 Bill Leahy: "Kanaka Flat is a refuge for a number of large, what I call charismatic species - bobcats and badgers and ringtails, which are a kind of raccoon, and golden eagles."

Much of the two-parcel ranch sits on flat land and borders two highways, meaning it would have been prime for future development. Clint Powell, area naturalist and columnist for the Julian News, says he's elated that the Nature Conservancy acquired the land for the simple reason that "it keeps it out of the hands of development." 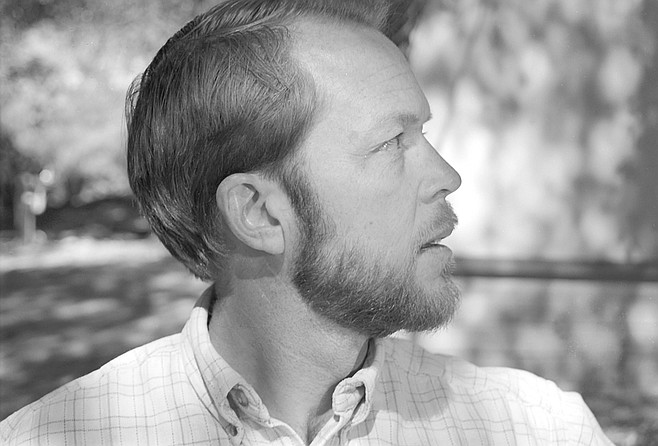 Greg Schuett, president of the Volcan Mountain Preserve Foundation: "The land there in Santa Ysabel Valley is highly subject to development."

But Bill Leahy, the Nature Conservancy's Southern California area director, says there's more to the purchase than just preventing a large tract of land from being subdivided and developed. "San Diego is very rich in terms of the number of plants and animals that it contains," he explains. "San Diego County has more species diversity, that is, more different kinds of plants and animals, than any other county in the whole continental U.S., which is very remarkable. At the same time, in San Diego County you have some of the most intense urban pressure due to growth and development. So, in addition to identifying those places that are unique and emblematic of what was there when the first settlers arrived, we're also looking at which sites are most likely to be lost in the near term due to these pressures. In the case of the backcountry of San Diego, the two pieces that were formerly owned by Tom and Mary Lou Edwards -- the Santa Ysabel East and West Ranches we're calling them -- those properties held a number of different values, biologically."

In particular, Leahy says, the Nature Conservancy was "very interested in oak woodlands, specifically Engelmann oak woodlands. Engelmann oak woodlands are very unique to Southern coastal California. They used to extend all the way up to Santa Barbara at the time of settlement. But they've more or less disappeared from most of their range. There are really only a couple of good examples of them left. One of them is in the San Diego backcountry in the Santa Ysabel Valley area. The properties we purchased are within that area. In addition to that, grasslands are rapidly disappearing from coastal Southern California. Most of the grasslands in the low-lying areas, particularly along the coast, have been developed or are about to be developed. They're gone. So here we had a chance to capture and preserve some of that. In addition, we have something that's also rare in Southern California, a perennial year-round stream -- at least four and a half miles of one -- called Santa Ysabel Creek, which is fed by a spring off of the property called Ironside Spring. It flows out of Volcan Mountain."

Santa Ysabel Creek is the headwaters of the San Dieguito River. "There's an amazing area," Leahy continues, "called Kanaka Flat, which is a large, wet meadow. That's up toward the east side of the property. It's an open area that seasonally is very wet and has lots of diverse plants and wildflowers associated with it. The property is also a refuge for a number of large, what I call charismatic species of animals that people closely associate with nature conservation. Those would be bobcats and badgers and ringtails, which are a kind of raccoon, and golden eagles, which make their home in the backcountry of San Diego and need large, open grasslands to forage. We suspect that these two properties will be very important for maintaining golden eagle populations. On top of that, there are actually some rare plants on the property, and some plants which exist only in the backcountry of San Diego."

Naturalists and conservationists in the area are thrilled with the fact that the Nature Conservancy acquired the Santa Ysabel ranch. One reason is because at its eastern edge, the ranch borders the existing Volcan Mountain Wilderness preserve. "Together," Clint Powell says, "they form a wildlife corridor from the valley, up the mountain, and down to the desert side."

Greg Schuett, president of the Volcan Mountain Preserve Foundation, says he's happy to see the purchase "because the land there in Santa Ysabel Valley is highly subject to development. It's all right now in large ranches, but ranching is no longer profitable. So, in the next 50 years, the land is going to go one of two directions, either to development or to nature preserves. Our point of view is we want to see it protected as a nature preserve, if the ranchers are willing to sell."

Among ranchers, Schuett surmises that there "seem to be three ways of looking at [the future of the area.] There are certain people out there that would like to see it stay in ranching hands forever. That's not realistic because it's not profitable. It might last one more generation. But the people who are retiring from ranching now are not passing it on to their kids and the kids would rather get into computer programming. So then this generation is faced with selling it. Who are they going to sell it to? Well, right now, there's money for them to get fair-market value and sell it to a conservation agency. There's also the opportunity for them to sell it to a developer or to try and develop it themselves. I just don't think that's the right way to go."

Tom and Mary Lou Edwards declined to comment directly on their motives for selling the land to the Nature Conservancy. But Kevin Knowles of Conservation Land Group, a for-profit agency specializing in brokering large land deals with conservation in mind, speaking for the Edwardses said, "They wanted to get out of the property with the cattle-ranching business being so tough in San Diego. But they didn't want to see it subdivided. TNC made a good offer, and they decided to go with them."

There wasn't a wide-open bidding period for the property. "We really only showed it to a handful of interested buyers," Knowles explains. "There were several private parties who were interested in buying it and who had made offers, actually. That's when the Nature Conservancy came in with an offer that was ultimately accepted."

Knowles described the $9,000,000 up-front, all-cash sum the Conservancy paid Tom and Mary Lou Edwards as "market value" and said it was "roughly the same as the other offers we received." The Edwards decided to sell to the Nature Conservancy because, Knowles explains, "They saw them as being very reputable, very credible. They saw in them a history of closing large transactions around the state and felt that was their best bet. You worry about the buyer not coming through on their commitments when you're talking about this much land and money. But the Nature Conservancy did things perfectly. All the timelines were met, and I know that Tom and Mary Lou were very happy in the end. Deep down, it probably meant a lot to them that it would stay relatively the way it is now."

What's next for the Santa Ysabel Ranch hasn't been settled yet. The Nature Conservancy traditionally manages the land it purchases but, "In California," Leahy explains, "we've kind of moved away from that model to where we suspect that there are local organizations that are much better equipped in the long run, in the 50-, 100, 200-year sense, to manage these lands. We do, however, want to make sure that the reasons we've bought the land, the specific animals and plants, are monitored and managed appropriately. One way we do that is by developing and creating collaborative partnerships that hopefully will turn into long-term institutions for management of these lands. That might be with a public agency; it could be county, state, or federal level. Or it could be with a private nonprofit organization or a combination of those. And, in addition to creating that local institution, we also try to inculcate into those partnerships certain principles for long-term management of the long-term resources."

Leahy points to the Santa Rosa Plateau outside of Murrieta in Riverside County as an example of this kind of cooperation. The Nature Conservancy co-manages that facility with Riverside County Parks, the Department of Fish and Game, and the Metropolitan Water District. It's open to the public for "passive public use" -- hiking, bird-watching, guided mountain biking, and horseback riding, but no camping, no hunting, no fishing. Leahy says this is the most probable future for the Santa Ysabel Ranch, though he can't say when it will happen. Right now, only Nature Conservancy members -- about 10,000 in San Diego County -- are allowed on the land but only as part of group trips organized by the Conservancy's recently opened office on Fifth Avenue between downtown and Hillcrest.

Still, selling the ranch to a private party is not out of the question. "In some cases," Leahy says, "we may acquire land and turn it back over to private land owners with a conservation easement -- that is, convenants and restrictions that the Nature Conservancy holds in perpetuity that describe, in a fairly detailed way, how we want to see the natural resources maintained and managed over time. We have partnerships around the country with farmers and ranchers and other property owners that are maintaining the property in a traditional, rural, agricultural, or ranching use. We have sold that property to them, subject to an easement that allows them to continue to do that because we see grazing as an important management tool. But we also have some prescriptions for times of year to move cattle out of certain areas, or it provides for setbacks from sensitive riparian areas or waterways. So there's a way we can actually conserve land and keep it in private ownership."