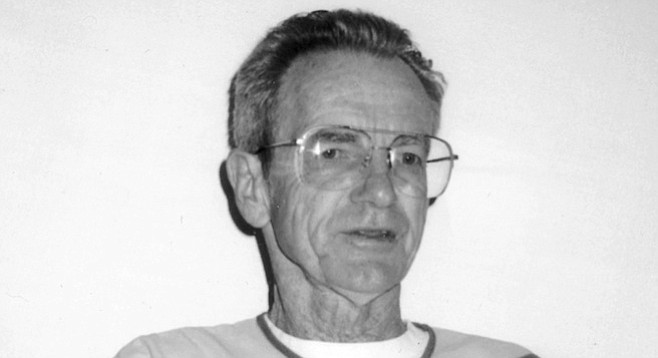 Chess at a Run: Orienteering Orientation

Too many marathons wore out the knees of this personage from the earliest days of the country’s longdistance running craze. “So I don’t run the roads much anymore,” says Bill Gookin, who began running “for fun” at age 12 in 1954. “I’ll run on the beach, especially Torrey Pines Beach, along the cliffs. Or I’ll run in the mountains, because the footing is different with every step, and the knees don’t take such a beating.” 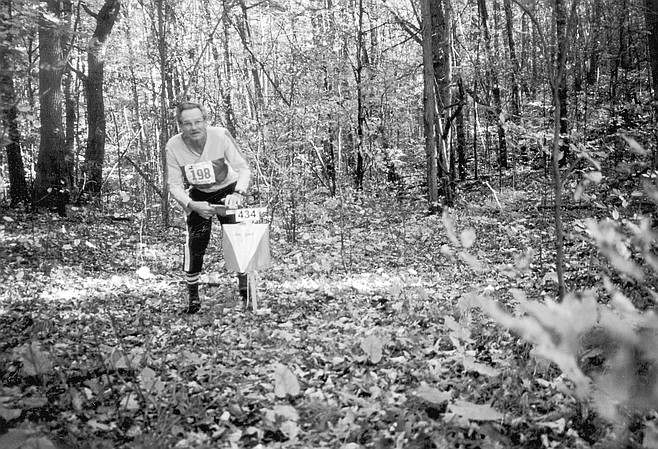 Bill Gookin at the World's Veterans Cup Championship, 1999. "The orienteer is relating to his environment and how he feels. The runner tries to blank out how he feels."

These days, instead of marathoning, the 68-year-old Gookin is devoted to the sport of orienteering. Orienteers (as those who orienteer call themselves) use a map to find their way from a start to a finish, progressing through a series of predetermined points or “controls”— a tree, a knoll, a boulder. A problem-solver’s delight, orienteering is also an improviser’s game. There are many possible routes to the goal. 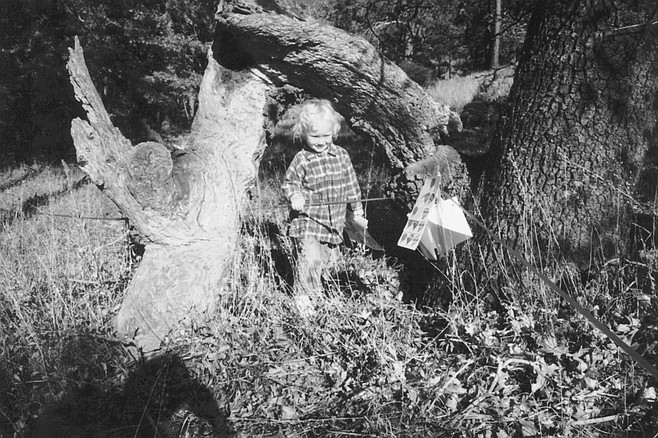 Joe Gookin on a children's string-orienteering course, Mount Laguna. "Little kids have to pick the right path and go in the right direction."

When Gookin heard about orienteering, he imagined staring at a compass and “pacing out distances,” which he’d done in the military and found to be “no fun.” But in 1969, a friend was organizing the first orienteering meet in San Diego — in fact, the first one west of the Rockies— and asked him to participate. “I figured I could get in a run on a cross-country course. Then I was told you could choose your own route! One of the guys went straight ahead, down into the canyon. Another went over to the road and around it I saw that I could follow a trail, and beat them both.”

He was hooked thereafter and helped organize San Diego Orienteering a couple of years later.

“As near as I can determine,” says Gookin, “orienteering began in Sweden in 1927, although the Finns claim they did it first. It’s popular throughout Scandinavia and in lots of other European countries, much more so than in the United States.”

Still, over the last three decades, the sport stateside has grown, especially in New England and in the northwest, “where they have more forests.”

The quality of American orienteering has improved, too. “The maps are much more detailed. Now I can run a course without even using my compass.”

Predictably, the best orienteers are good runners, but they are also thinkers. “I remember when the former world’s record holder for 1500 meters and 3000 meters tried orienteering. On his way to the first control he ran a half-mile past it.”

“Chess at a run” is what Gookin and others call it. Not everyone enjoys thinking and running simultaneously. Gookin recalls that when San Diego Orienteering was new, he optimistically eyed the 2000 members of the San Diego Track Club, which he had also helped found. “I thought, ‘We’ll get all of them [for orienteering). It’ll be great.’ Well, we got two or three.”

The trouble is the “inward focus” of runners, according to Gookin. “The orienteer is relating to his environment and how he feels. The runner tries to blank out how he feels. When I was running, I would say [to running buddies], ‘Oh, look! A wild canary!’” Or he’d urge them to notice flowers in bloom. “And they’d say, ‘Shut up, Gookin, and run.’ They didn’t want to be distracted. You know, the runner’s high has nothing to do with the venue.”

After getting sick on Gatorade during an Olympic trial marathon, Gookin invented a substitute, Gookinaid.

He devised it by analyzing his own sweat to determine what was being lost through dehydration. “I had a degree in biochemistry, so I had the expertise.”

Retired now from biochemistry and from teaching, Gookin says he spends his time marketing close to a quarter of a million dollars’ worth of Gookinaid a year. He also promotes orienteering.

He designed the course for a meet here this Saturday. Beginners are encouraged to participate and will receive instructions. All ages are accommodated.

“For little kids we have ‘stringorienteering.’ They follow a string or tape. Then they start doing courses on paths. But they have to pick the right path and go in the right direction. They graduate from there.”

Even for beginners, getting lost is not inevitable, Gookin maintains. “People who get lost are those who go out on courses they’re not ready for, although they may think they are.”

Maybe they have put too much confidence in the compass. “But you can’t always stay on course with a compass. You’ve got things in the way — canyons and hill and spurs. And you don’t want to go up and down when you can go around.

Sometimes the beginner is lost and doesn’t know it. Same with a backpacker. “The backpacker — what does he say?” asks Gookin rhetorically. “He stops, pulls out his map. ‘Let’s see. Where am I?’ Where am I? He’s lost — to some degree.” As for the orienteer “He’s always saying This is where I am. I’m here. I’m here. And that is where I am going.’”

Cost: $8 for individual or group with one map; compasses $1 and maps $2