Ride the rails of the San Diego & Arizona Eastern out of Campo on vintage railcars.

The desolate backcountry community of Campo, barely a stone's throw from the international border, has exactly two things of interest to San Diego daytrippers: the Old Stone Store and the Campo railroad depot. The former, a museum housing historical artifacts, sits next to the site of a notorious 1875 shootout involving border bandits. The latter, a collection of relaid track, switches, and vintage railroad cars and engines, represents the primary holdings of the San Diego Railroad Museum.

Once a lonely stop on John D. Spreckels's "impossible railroad" -- the San Diego and Arizona Eastern -- the depot now serves tourists who board vintage railcars pulled by equally vintage steam or diesel locomotives. On a recent hot and dry summer day, my companion and I savored the delights of a slow-paced trip seven miles or so through green pastures and up into rocky hills to Miller Creek siding -- and back the same way. While screech places and couplings between the cars groaned and steel wheels rhythmically clanked over gaps in the rails, we sat in a cooling breeze wafting through open windows and chatted with our gracious volunteer hosts about the scenery moving by.

Near the end of the ride, about half the group on board opted to disembark and tour the museum's restoration yard, where we saw work in progress on various locomotives and freight and passenger cars. Some are housed in a spacious former gymnasium used for Italian prisoners of war during World War II. The pride of the yard is a completely restored and operable 1912 steam locomotive that had to be stripped down to basic parts and laboriously overhauled.

The Miller Creek excursion, which does not require reservations, is offered Saturdays at 12 noon and Sundays at 11:00 a.m. and 2:30 p.m. Adults pay $10, children from 6 to 12 years ride for $3, and kids under 6 are free. Be sure to arrive at least 40 minutes early to catch a pre-trip lecture/discussion about the history of the Campo region and the always-hard-to-maintain and now-defunct San Diego and Arizona Eastern Railroad. Its tracks, which still exist in various stages of repair and disrepair on both sides of the border, connect San Diego, Tijuana, and Tecate with the Imperial Valley. 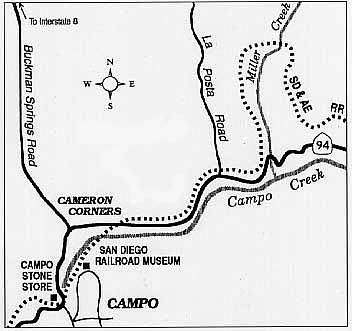