When Marnie Was There (Omoide no Marnie) 1.0 stars 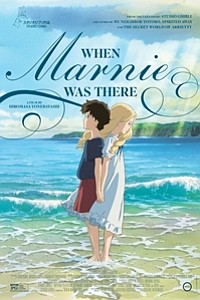 What may wind up being the final film from Studio Ghibli comes across as more whimper than bang, an excruciatingly simple story about an asthmatic foster child who wishes for a more normal life. Anna — long of neck, short of hair, pointy of chin — is a sour, sickly girl who hates herself for being sour and sickly; you can tell because she sometimes says rude things and because she tells you so. (This is a film where nearly every emotion and dynamic is named and announced, every noteworthy moment greeted with an inquisitive "Huh?") But after a severe attack necessitates a trip to the clean-aired country, she meets Marnie, the mysterious girl who lives in the mansion at the edge of the marsh. There's some weirdness around her new friend — dreams bleeding into reality, strange disappearances, etc. — but it doesn't matter. Until it does. The eventual prickles of interest subside into a comfortable, wholly expected, and exposition-heavy conclusion. Dramatically unworthy of its gorgeous coastal landscapes and ever-shifting light. 2015.