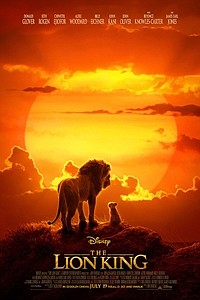 The trouble with Jon Favreau’s “photo-real” — as opposed to “live action” — remake of the studio’s animated super-smash hit is there right at the outset, in the shot-for-shot copy of the opening scene. As the sun rises over the African plains, all the animals who inhabit the pride lands gather at the base of an enormous rock outcropping to pay homage to their future king: Simba, the leonine son of Mufasa and Sarabi. On the one hand, it’s impressive as all get out: gosh, but the animals look real. On the other, why on earth are a bunch of real animals celebrating the birth of a new apex predator? Huzzah, a new pair of murderous jaws! Which one of us will be lucky enough to provide his first fleshy meal? Yes, yes, the question of eating your subjects came up in the animated version, but here’s the genius of animation: it provides just enough of a remove from reality to make the notion of the hunted welcoming the hunter easier to…swallow. Here and elsewhere, the move to live-action becomes a net loss. As for the rest of it, I can’t imagine that I’m the first critic to have seen this story and found his thoughts drifting to that other Africa remake: Weezer’s cover of the Toto top 40 hit. People liked it, but I’m convinced they liked it because they liked Weezer, and because they knew the song already, and because it went down easy — not because it added anything worthwhile, or brought any fresh interpretation to the material. By this point, Disney’s do-overs feel a lot like their cash-grabby, inspiration-free ‘90s direct-to-video sequels, only with vastly better production values. 2019.

Day-um, Lick, look how many screenings! No wonder it will make a mint!!!