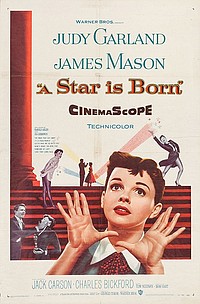 The George Cukor remake, seen for thirty years with almost half an hour cut out of it, has been "restored" to very near its original length. (The only partially restored scenes that feature a dialogue track but no accompanying footage, just still photos instead, give the movie a decidedly educational, and even experimental, flavor.) But the found footage, particularly the extra couple of musical numbers, merely tips the already unbalanced scales further toward the female lead: Judy Garland. Indeed the addition of songs to the 1937 original is perhaps the primary, but not the only, aspect of a general makeover process whereby the movie has cut down on brains and built up other body parts: lungs, obviously, but also heart, or at any rate lachrymal glands, not to mention overall dimensions: three hours in length, Cinemascope in width. With James Mason, Charles Bickford, and Jack Carson. 1954.