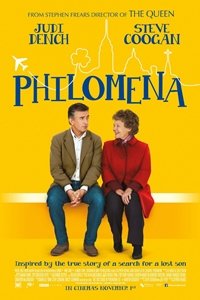 A snooty journalist (Steve Coogan), remiss when it comes to covering human interest stories, rides shotgun on a road trip with a bemused mother (Judi Dench) in search of the son who, decades earlier, was taken from her and sold for adoption by corrupt Irish Catholic nuns. Coogan tries his hand at serious drama for the first time here, and the enormously talented writer-comedian - unable to put aside the mugging and under-his-breath one-liners - frequently steers this fact-based, remorse-laden-enough-as-it-is jaunt in the direction of another gooey Guilt Trip. Director Stephen Frears signed it, but this picture is clearly a case of actress as auteur. Dench’s illocutionary skill constitutes a classic exemplar of an actress grounding her character in the context of real-life human existence. The woman is incapable of delivering one false gesture. Spoiler alert: the seemingly adventitious autographed 8x10 of Jane Russell nailed to the Sister’s wall will find its explanation in reel five. 2013.