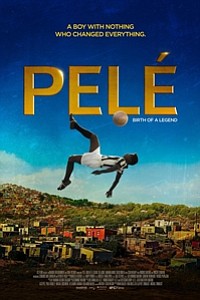 The rags to riches story of the first 17 years in the life of soccer superstar Pelé are covered in this painfully routine biopic. Had the writing/directing team of Jeff Zimbalist and Michael Zimbalist harnessed one-tenth of their real-life subject’s electricity, the picture could have been used to power Wembley Stadium. As it is, in light of the phonetic line-readings by many of the Brazilian cast members, one wonders why they simply didn’t speak in their native tongue. Ah — The film was produced by subtitleophobe Brian Grazer (Cinderella Man, the other Nutty Professor) with the big “P” himself taking executive producer credit (hence the family friendly PG rating). Together they whip up and beat to death a sports-film cliché soufflé. As Pelé’s manager and coach respectively, Vincent D'Onofrio and Colm Meaney appear just long enough to show the rest of the greenhorns how experts do it. With Kevin de Paula. 2016.