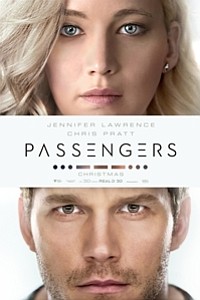 Director Morten Tyldum makes the most of many of his assets in this interplanetary romantic drama: the vast exterior emptiness of space, the vast interior emptiness of the colonist ship Avalon as it is experienced by a single passenger awoken 90 years early, the gently affirming android bartender in the Overlook Hotel-style bar, the devilish/boyish charm of Chris Pratt, the feline/womanly charm of Jennifer Lawrence, and the appealing physiques of both. Beefcake and cheesecake — how equitable! What isn’t equitable is the relationship between these two restless pioneers (he wants a world where he can build things, she wants new journalistic territory to cover), because one of them is keeping a terrible secret from the other. That secret provides the only real drama in their inevitable love affair, and for a while, it looks like it might be enough. But in the end, Tyldum makes the very least of it. Fixing the malfunctioning Avalon requires addressing the fundamental damage, but the film seems to argue that the same does not hold true for the human heart. 2016.