Harry Potter and the Goblet of Fire 1.0 stars 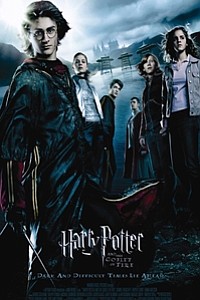 The fourth installment in J.K. Rowling's series of children's books yields a two-and-a-half-hour movie which, for all its furious activity, gets virtually nowhere. It gets, more specifically, through the "legendary" Triwizard Tournament, only to arrive at the dampening admonition, "Dark and difficult times lie ahead." Potterites, under the freedom-of-religion pact, ought not to be begrudged their mythology; and two and a half hours of lavish illustration might well strike their eyes as a feast. The skeptic or the mere apathetic is more apt to notice the presumptuousness of filmmakers who expect their audience to meet them seven-eighths of the way. (Have you done your homework, kiddies?) The skeptic or apathetic will also be quicker to sense that the unabated spectacle of special effects becomes almost routine, almost humdrum, regardless of how imaginative some of those effects may be: the sailing ship that surfaces and submerges like a submarine, the ghostly face of Sirius molded in the glowing embers of the hearth for a fireside chat. Such a viewer will also be more prone to argue that this sort of anything-goes fantasy, with few established rules, fosters a feeling of passiveness if not instinctive, involuntary withdrawal. The new director, Mike Newell, is the best of the three to take the controls in the series to date (Chris Columbus for parts one and two, Alfonso Cuarón for part three), although a runaway train is open only to the most limited guidance. We are reminded of his capabilities not so much by any demonstration of them as by the presence of Miranda Richardson, his scintillating star in Dance with a Stranger, and quite delightful here in the new role of Rita Skeeter, nosy news reporter for the animated scandal sheet, The Daily Profit. With Daniel Radcliffe, Rupert Grint, Emma Watson, Brendan Gleeson, Michael Gambon, Ralph Fiennes. 2008.