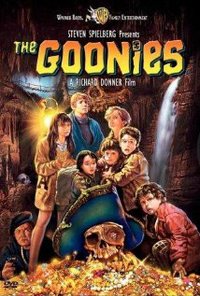 A Richard Donner Film, but “a Steven Spielberg Presentation.” The second fellow wrote the original story and was one-third of the team of executive producers, and the finished product is chock-full of Spielbergian ingredients: skeletons, bugs, bats, boulders. There is even (in the duplicitous spirit of E.T.’s resurrection) a moment of sentimental self-sacrifice so that there can later be a moment of joyful reunion when the self-sacrificer is spared anyway. There are also lots of jokes — of the sort, for example, wherein the penis will be broken off Mom’s miniature reproduction of Michelangelo’s David, and will be glued back on upside-down. The story tells of a gang of seven kids (these are The Goonies, modern counterpart of The Little Rascals) in search of the legendary buried treasure of One-Eyed Willie, who has protected his riches with an elaborate complex of booby traps that would put the Egyptian pyramid-builders to shame. All of the kids take turns getting hysterical, and the movie is consequently unpleasantly shrill. It would be a blessing if some of the kids could be killed off, but it isn’t that kind of movie. It would not want to alienate anybody. And indeed its closest kinship to childhood is probably its desperate desire to be popular, though it ultimately takes this desire beyond desperation and into depravity. Sean Astin, Josh Brolin, Jeff Cohen, Kerri Green, Martha Plimpton. 1985.