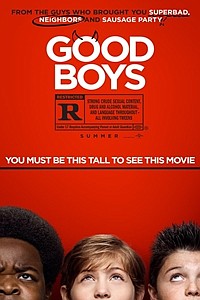 Wanna make an audience cry? Throw a dog under the back wheels of a passing semi. Wanna make an audience laugh? Have a child say "fuck." Easy, ain’t it? The twist to this otherwise plotless and pointless bush-league exercise in stoner comedy is the casting of three minors (Jacob Tremblay, Keith L. Williams, and Brady Noon) as the leads. Voilà: high-concept hilarity for lowbrows! More thought and ingenuity went into designing the Point Gray Pictures logo than into spinning this profane “day in the life” adventure yarn. I’m all for a raunchy horseplay captained by foul-mouthed kids, but according to screenwriters Lee Eisenberg and Gene Stupnitsky, the dirtiest word in the English language is "wit." Were it not for cursing and the malapropistic misuse of sexual terms (misogynists give massages), our trio of four-foot adenoidal gangsta rappers would stand mute. On the plus side, the promise of children ingesting Molly is never fulfilled. Normally I’d say first-time director Stupnitsky deserved to be stoned, but judging by the pacing and composition, he was. 2019.