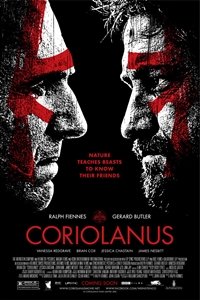 Ralph Fiennes, glowering like his Harry Potter villain Voldemort, is imposing and monotonous as Shakespeare’s fascistic, Roman hero Coriolanus, who lives for slaughter. Vanessa Redgrave dominates her every scene as his mother, a she-wolf of aristocratic pride who could have suckled Romulus and Remus. No milk could dilute the poisonous egotism of General Coriolanus. John Logan set the harsh, declamatory play in a modern, Balkan “Rome,” a sort of Belgrade on the skids, with Redgrave and politician Brian Cox providing a few gestures for humanity. 2012.