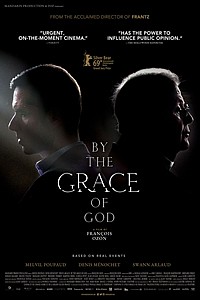 The first thing Alexandre (Melvil Poupaud) does after going public about his childhood molestation at the hands of a priest is to gather his family of five around the dinner table to inform them of his decision. One is prone to expect excess in a film by François Ozon (Water Drops on Burning Rocks, Swimming Pool) — that’s where the fun is — but in this case, Alexandre, who remains faithful to the church, is doing it for the sake of his children, to teach them to report any such behavior. The pedophile priest (Bernard Verley) admits to wrongdoing, but the repeat offender doesn’t understand why everyone is making such a fuss. A PR team is hired to support victims, to raise awareness. They envision a giant phallus, complete with their company logo, written in clouds in the sky above the Basilica. This is as close to outrageousness as it gets, with Ozon wisely opting to frame the fact-based events as a straightforward crime drama. 2019.

I understand it is far more intelligent and complex than the self-righteous and pedestrian "Spotlight" with its one-note Mark Ruffalo performance.