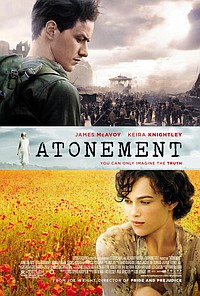 British, bookish period piece, from an Ian McEwan novel, about a young girl's misreading of the amorous activities of her elders, and its tragic consequences. (A mole on the right cheek links the three different actresses who play the role, Saoirse Ronan in the Thirties, Romola Garai in wartime, and Vanessa Redgrave in modern day.) The movie starts rather sedately, despite some point-of-view tricks, in a commonplace country estate; and it then gets rather overblown in the war sequences, including a marathon Steadicam single take of the evacuation at Dunkirk. But all in all it's well-mounted, well-dressed, well-acted, and, well, dull. With Keira Knightley, James McAvoy, Brenda Blethyn, and Harriet Walter; directed by Joe Wright. 2007.