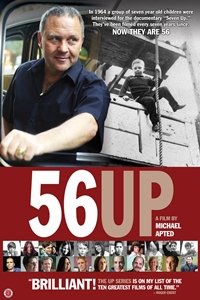 The seventh installment in what could very well be television’s first reality show. In 1964, Paul Almond began filming a group of fourteen seven-year-old British schoolkids. The directorial reins were later handed to Michael Apted, who has since gone back at regular seven-year intervals to document the group's growth. Inspired by Truffaut’s fictional Antoine Doinel cycle that began in 1959 with The 400 Blows, the Up series offers viewers an exploration of the power of cinema as a tool to document and record human growth. (The filmmaker’s original intention was “to get a glimpse of England in the year 2000.”) If you have been with the program from the outset, it makes for highly compulsive viewing. 56 Up finds our diverse group of 13 participants — Charles has been missing in action since 21 Up — well ensconced in middle age. Two of the subjects are actually upset that their participation in the show hasn’t led to a recording or publishing contracts. Those new to the series may want to pay a visit to Kensington Video and play a little catch-up. 2012.