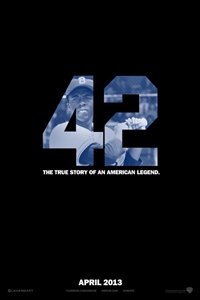 Television veteran Chadwick Boseman gives a fine, canny performance as Jackie Robinson, the man who broke Major League Baseball’s color barrier with the Brooklyn Dodgers in 1947. Well, except for when he talks to his wife and infant son: then, writer-director Brian Helgeland’s script drives him into speechmaking about the interior life he is otherwise allowed to convey through expression and action. And sometimes, through inaction: as Dodgers owner Branch Rickey tells him, success will require Robinson to be like Jesus and turn the other cheek. (Harrison Ford’s growly-jowly performance as Rickey does nothing to obscure an excellent character: a man whose motivations include greed, devotion to the game, and a genuine strain of Christianity.) The story isn’t much more than a hit parade of “Shut up, racist” moments — Alan Tudyk's opposing manager just oozes with venomous talk — but its blunt force is enough to get the job done. 2013.