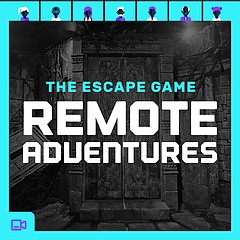 Play The Escape Game’s newest game, Ruins: Forbidden Treasure, from anywhere in the world using Zoom. Control an avatar wearing a live feed camera, search 360° images of the room, and use items in your online dashboard to progress through the game! Plus, one of our Game Guides will be there to help along the way. Assemble a team of friends, family, or co-workers no matter where they are! You have 60 minutes, can you escape?