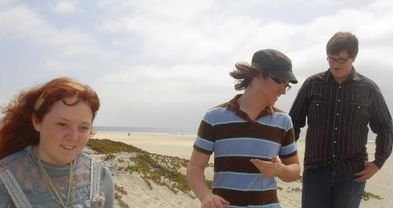 The Wrong Trousers used to be found weekends at Balboa Park, performing a jaw-dropping version of the Buggles’ “Video Killed the Radio Star,” on mandolin, standup bass, and full-sized concert harp. “On our best days at Balboa Park, we make about $300,” said harpist Kelsea Rae Little, who was a teen at the time. “Low ends for a set are about $20 to 30. It all depends on the weather and the size of the crowd.” Park rangers give out ten free music permits on the first Saturday of each month. “This permit allows you priority to one spot,” says Little. “We usually set up across from the train museum.”

All in their teens, Mackenzie Leighton played standup bass (“His playing comes from his strong jazz background”), while Joseph Lorge played mandolin (having studied with local guitar god Wayne Riker from 2004 - 2006) and sang. The band’s setlist was evenly split between offbeat originals and covers of acts like the Traveling Wilburys and Joanna Newsom. “Our most popular cover to date is "Such Great Heights" by the Postal Service,” according to Little. “It won us our Coronado High School talent show.”

The Wrong Trousers recorded a CD with local jazz mainstay Peter Sprague, whom they met while recording tracks for a mutual friend at his studio. Two original songs from those sessions posted on MySpace were played over 20,000 times. “We actually get stopped in the streets of San Diego by people who recognize us from the park, MySpace, or YouTube,” said Little. “A fan on the street even asked us to play at her birthday party once…People are nicer in person than they are on the Internet.”

At the end of 2007, the Wrong Trousers' viral video of "Video Killed the Radio Star" in Balboa Park was named one of the top 50 staff-picked videos of the year on the PitchforkMedia website. In 2008, they won a local H.A.T. award (Honoring Acoustic Talent) as Best Acoustic Band.

In 2009, the band went on an extended hiatus, though they played a reunion show in 2010. Bassist Mack Leighton played on four tracks on Kelsea Rae Little’s debut solo full-length Personal Myth, released in late 2011.

“The Wrong Trousers are on an indefinite hiatus, but definitely amicably, and there is a possibility of a fun reunion show in the future,” said Little. The next reunion performance took place at Lestat's in Normal Heights on July 5, 2013.