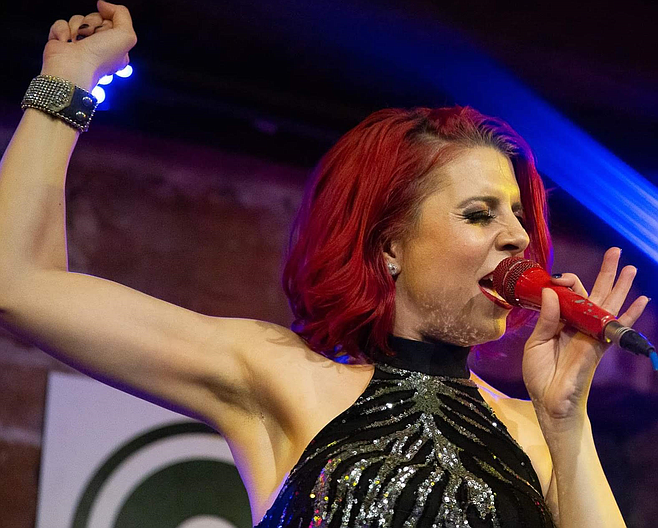 Whitney Shay grew up near Alpine, on a ranch with Clydesdales. “I started listening to blues, and soul, and R&B...I started digging it. I started going out to hear live music more. It was, like, asking for me.” She says doing the blues is sort of like doing a monologue. “It gives you a story to grab onto.”

In high school, when Shay’s family moved to the Japatul Valley near Jamul, she began performing in a USO-type show in high school. “It was all, like, ‘40s music. We were doing all this Andrews Sisters music. That was the precursor.”

Her single biggest influence as a performer? “Etta James. Hands down. She can sing so many styles.” Shay sometimes has a rasp in her delivery that sounds like her pipes were basted in the same gin and juice and nicotine as James over years (they were not.) At other times, she glides about the blues scale slippery, free of gravity like a trombone.

Shay’s 2012 debut album Soul Tonic was mostly recorded at Archie Thompson’s home Stat Records studio and mastered by Alex McCollough at Yes Master, in Nashville. "Archie Thompson, who’s been around a long time, I hooked up with him, he does this church gig, and he really likes my voice so he wrote a song for me.” That led to the recording session.

“It’s all really old school R&B…my producer was, like, how does a girl from East County learn to sing like this? My mom didn’t listen to this music. But she says my grandmother used to sing, like, ‘Fly Me to the Moon’ when I was in the crib and stuff.”

Thompson adds, “I was intrigued by Whitney's voice after our ﬁrst telephone conversation. After hearing her sing live, I knew I had to get her into the studio. When she sings, you feel it. The girl has soul.”

Tracks were mastered in Nashville by Alex McCollough at Yes Master. “He [Thompson] told them, I want a lot of low end. If you’re gonna pick a reference record, pick Etta James and ‘Tell Mama.’ I want big, and I want lots of horns.” The twelve tracks include a cover of “Your Good Thing (Is About To End)” by Isaac Hayes and David Porter and the Etta James classic “Can’t Shake It.” Guest players include jazz great Holly Hofmann on flute, trumpeter Mitch Manker (Ray Charles Orchestra), Mike Thompson (Rod Stewart, Eagles), and internationally renowned San Diego blues guitarist Nathan James.

"I'm flying back to Brazil to tour with Igor Prado and play a bunch of awesome festivals and gigs with some amazing Brazilian blues musicians," reported the busy vocalist in summer 2016.

Over the next couple of years, her music was heard in an HBO trailer for Here and Now, created by Alan Ball of HBO's True Blood and concerning multi-ethnic family dealing with issues of a Trump-led America. Shay’s tracks have also been placed on NBC, Bravo, BET, and in Tyler Perry’s A Madea Family Funeral.

Her 2018 album A Woman Rules the World received praise from music critics who called the singer “a future blues icon” (Blues Matters!), “one of the next best things in soul music” (Blues and Rhythm Magazine), and “the epitome of a rising star” (Elmore Magazine). The album landed on several notable music media lists, including Top Albums of the Year in Blues Music Magazine, France's Soul Bag Mag, and top ratings in Norway's Bluesnews Magazine and Germany's Magazin Bluesnews.

Shay was a 2019 Blues Music Award nominee, and she won Best Blues Album and Artist of the Year trophies at the 2019 San Diego Music Awards, after which she booked a tour of Brazil running from April 9 through 29. That July, she played her first festival in Europe, on July 6 at a blues festival, performing before 5,000 people backed by the Michael Zito Big Blues Band featuring BB King’s horn section.

Her 2020 album Stand Up earned a three and a half star review in the May issue of Downbeat magazine and topped Billboard's Blues chart.