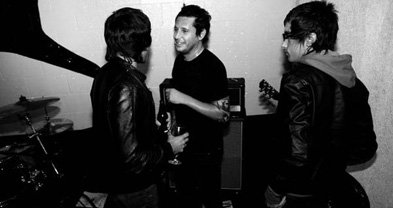 RIYL: The Prayers, the Plot to Blow Up the Eiffel Tower, Kill Me Tomorrow, XTC, Iggy and the Stooges, New York Dolls, They Might Be Giants

Influences: The Plot to Blow Up the Eiffel Tower, Kill Me Tomorrow, the Prayers, the Muslims, XTC, Iggy and the Stooges, New York Dolls, Mika Miko, No Age, Rockpile

Formed from the ashes of the Plot to Blow Up the Eiffel Tower, with three former members of that band. Frontman Charles Rowland seems to love both glam rock and the Sex Pistols, improbably melding those influences with his aggressive vocals. Bassist Dan Wise has also played with Starlite Lounge and Kill Me Tomorrow.

Rowland describes his strangest stage moment. "At a gig on the outskirts of Barcelona, a rowdy crowd attempted to de-pants me onstage while we were playing a song. I fell down, but they did not get them off."

In 2007, Rowland had a book of short stories published, Darklands. Sir Charles