The Vision of a Dying World 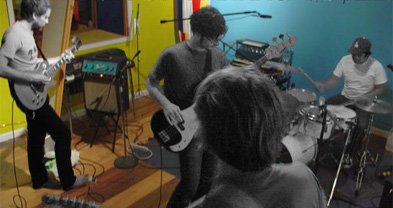 Sound description: Indie folk-rock with a touch of gospel-country.

The Vision of a Dying World was founded by Jackson Milgaten and his brother Keith while the siblings were growing up in Las Vegas and Phoenix. After moving to San Diego around 2005 and hooking up with local players, they began writing theatrical and ambitious songs that mix elaborate harmonies with prog-rock guitar, jazz-inspired sax work, and even the occasional ukulele solo.

Having been raised by a Christian songwriter, it should come as no surprise that the duo’s compositions frequently have an unmistakable, if subtle, Christian vibe.

"I’m sure it’s because our lyrics occasionally reference religious imagery," says Jackson Milgaten. "Keith and I were raised by an amazing woman who is very much in love with Jesus and devoutly follows His teachings. She is also a lifelong musician and much of the reason that we got into music. Although we didn’t exactly adopt her beliefs as our own, there are very few people who have had more of an impact on us. I suppose this translates into a certain wonderment with religion and spirituality. Thus, people tend to get confused. But let me assure you that just because we occasionally sing about Jesus doesn’t mean that we’re all up on His jock.”

The band played some of their first local gigs at Scolari's Office. "When we moved here [from Las Vegas], that was one bar my friends told me to play in San Diego," says Jackson Milgaten. "I like it that the stage is small, and it's dimly lit. Because there is usually no cover, bands are paid from the bar receipts."

Their 2007 album is called And the Grammar Lamb. The group was Filter magazine's Undiscovered Band of the Month in December 2007. They were nominated Best Alternative Band at the 2007 San Diego Music Awards, and their 2008 album Skelephone Call from the Eastern Side earned an SDMA Best Alternative Album nomination.

Jackson Milgaten has also promoted concerts under the moniker Action Jackson Promotions, and he co-founded the label Single Screen Records, along with Craig Barclift (bassist for the Powerchords). As of 2009, Milgaten's house in North Park sometimes doubled as a performance space he calls the Boat House. He has also played with the Paddle Boat and Cuckoo Chaos.