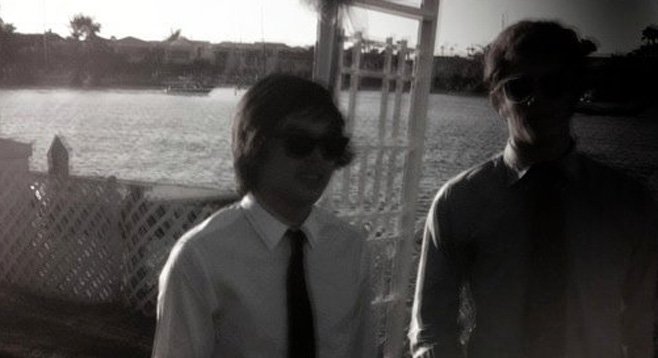 Petering and Ngo grew up in the same Scripps Ranch neighborhood and attended the same high school. But they met and discovered a mutual appreciation for music while skating a mini-ramp in a friend’s backyard. They started making music while in college. “Random projects here and there,” says Ngo. “It’s always been a side thing that we, like, did.”

TV Girl’s unique poppy chillwave-ish sound comes from the combination of Ngo’s sweet voice and subtly twisted lyrics over Petering’s lushly arranged beats, built from samples of everything from Dylan to Tracy Chapman to, as Petering puts it, “some obscure 1960s garage rock song” downloaded haphazardly off the internet.

Their eponymous four-song EP TV Girl was released via the music-sharing site called Bandcamp (tvgirl.bandcamp.com). In late 2010, a song from the EP “If You Want It” earned a spotlight on the Pitchfork website’s Forkcast column.

“I remember seeing it and doing a double take,” says Petering of the online mention. “It was kind of weird, like, getting picked up so fast.”

The reviewers at Pitchfork described TV Girl’s ballad “If You Want It” as “balmy and inviting, despite its narrative about a drunken love interest's sloppy evening.” They called TV Girl’s use of a sample lifted from the once-popular “Hello It’s Me,” Todd Rundgren’s 1973 hit, “ballsy.”

A Pitchfork mention carries no small weight in the music business. Their often snarky reviews have a reputation for making or breaking CD sales and band careers.

“They found us,” says Petering. “We sent our stuff to some smaller blogs. We didn’t bother sending it to the bigger blogs right away.” He says their song took off and got picked up by a lot of other blogs. “Eventually, it got to Pitchfork.” Eventually, in virtual terms, means one week in this case.

“Yeah,” says Ngo. “That [Pitchfork review] was only about a week after we self-released the EP.” Petering says it got picked up next by the bloggers at the UK Guardian. “And, I heard it was on a BBC podcast,” he says.

However, in summer 2011, “If You Want It” essentially vanished from the internet, after Rhino Entertainment, a subsidiary of Warner Music Group, issued notices to websites to remove the song due to the allegedly illegally sampling Todd Rundgren’s song “Hello It’s Me.” The takedown notices all but wiped the TV Girl cut from the internet.

With Joel Williams added to the roster, (DUDES, D/Wolves, Kris Kraft), TV Girl released their Benny and the Jetts EP in July 2011. Next, their seven-inch “Girls Like Me” b/w “Sarah (Meet Me in the Sauna)” on Small Plates Records was made available via download, with a limited edition vinyl version on yellow wax, limited to 150 copies.

In April 2012, having relocated their home base to L.A., they released a single called “I Wonder Who She’s Kissing Now,” taken from their 15-track mix tape, The Wild, The Innocent, The TV Shuffle. The mix tape was released in May, assisted by Himanshu of Das Racist’s Greedhead label.

They spent most of July 2012 on tour, sweeping through the south from Texas to Florida and then back to L.A. In early 2013, the band released an interactive video for their catchy single "Girls Like Me" that allows viewers to make a cameo via webcam shots.

Directed by L.A.-based duo fourclaps, the video was filmed via Skype with TV Girl fans and friends (you may recognize Ryan Solomon of DUDES in the mix) who sing along, strike poses, and perform a choreographed finger jive while passing around one of the band’s 45s.