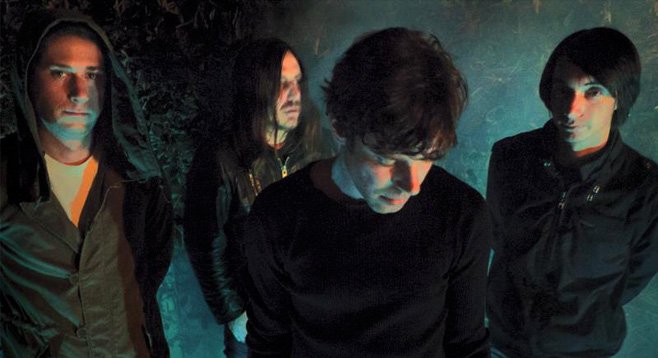 RIYL: Lights On, the Stereotypes

Somewhere in the shadows beneath a consummate sun-drenched pace of life lies hidden occult fantasies sure to keep you up at night, wherein Tropical Popsicle beckons you into their veiled world. Take the jangly melodies of 1960s garage jams and surf rock inspired by Southern California beaches and cast a psychedelic gloom across the whole coastline; Tropical Popsicle brings the doleful feel of the end of summer, over and over again.

Mixing hazy 1960s psych-pop with 1980s minimal wave, the band is fronted by singer-guitarist-keyboardist Timothy Hines (Lights On, the Stereotypes), of La Mesa, who plays guitar and sings and writes most of the music. He says his influences are what he calls "60s stuff. My parents grew up in that era. Jefferson Airplane, Creem, 13th Floor Elevators. And that's what I grew up listening to."

He says he got into new wave and post punk bands for a while before and during high school. "But I went back to psychedelic rock in my late teens, so I never really left it."

Tropical Popsicle has been called a mix of post punk, psychedelic, and goth, rolled into one. "The music is kind of scatterbrained like me," says Hines. "It's all over the map, whatever my state of mind is that week, that month, that moment."

Hines developed Trop Pop from a solo project to a full band with the edition of three members, Kyle Whatley (guitar, organ, backing vox), Chase Elliott (bass and synths), and Ryan Hand (drums & rattles). Their debut concert happened at Soda Bar on June 2, 2011, where they launched their 7-inch “Beach With No Footprints” b/w “Always Awake in Shadows.”

San Diego label Volar Records re-released the 7-inch in October 2011, along with The Age of Attraction EP. The same month, they played the CMJ music marathon in NYC. Their first west coast tour was launched in summer 2012, and they have for acts like Matthew Dear, White Fence, Bleached, the Pains of Being Pure at Heart, UMO, Beach Fossils, The Fresh & Onlys, Disappears, Gauntlet Hair, and more.

Hines is also known around town for successfully placing music on various TV shows. “The music supervisors in Hollywood run a small incestuous circle and take a liking to upcoming bands that are cheap for hire, but, it pays well,” he says. “It just adds another log to the fire of trying to build a buzz in this wacky music market.”

A new 7-inch, “Ghost Beacons” b/w “Skulls in the Stars,” dropped August 24, 2012, from Volar Records. Touring through November with SISU (aka Sandra Vu of Dum Dum Girls), they hit the Casbah on November 27, 2012. Their full-length Dawn of Delight dropped in January 2013 via Volar Records (U.S.) and the Talitres label (France).