Triumph of the Wild 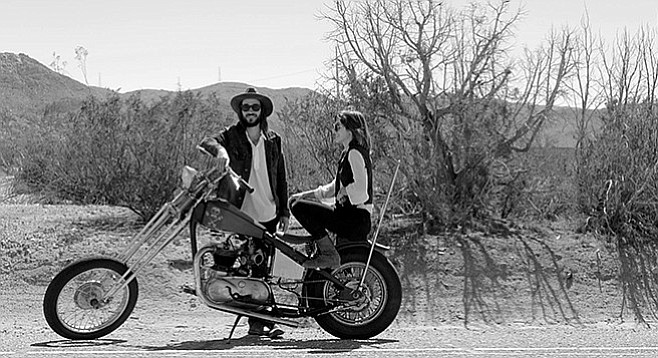 RIYL: Timbuk 3, He and She, Tuck and Patti, Best Coast

Triumph of the Wild is a rock duo featuring Christy Barrett and Ryan Schilling. Schilling mans the kick, harp, guitar, and backup vocals while Barrett handles the percussion and kazoo, in addition to her lead vocals. In late 2013, the duo embarked on a five-month trip across the states, living in their Volkswagen van. On their return to San Diego, they recorded their self-titled debut album. The album earned a 2014 award for Best Local Recording at the San Diego Music Awards.

A ten-song followup, We Come With the Dust, was released in April 2015, preceded by the single "Brown Dog Blues," with Barrett and Schilling permanently giving up their apartment (again) in exchange for a motorhome, to embark on a seven-month tour of the United States. "It's being released on vinyl, CD and digital," said Schilling at the time. "Different strokes for different folks. It'll be our first vinyl release ever for both of us."

As for the Easy Rider-ish cover, Schilling told the Reader "We are big fans of the 60's-70's chopper scene and it's influence on musicians of that time. Our favorite LP covers are simple ones with a classic bike and the artist just hanging around. There's something about it that keeps you staring, or maybe just us. The bike that we used on the back cover was a bike I built that had some crazy/dark history. I picked it up off a property that was Charles Manson's original hog farm and later was a Satan's Disciples club house. We called it black death because we thought it was cursed, wouldn't run longer than a week at a time."

"The album art work was done by Chad Wells and he took the reigns for the design and everything just fit. You can feel the dust in your lungs when looking at it."

The band re-recorded and re-released We Come With the Dust in April 2016. Schilling told the Reader "We decided that the recording we did didn't fully communicate the vision we intended for the songs. We said, why settle? We're really proud of these songs. We re-recorded it in our home studio in Oceanside and we also hand cut all the vinyls."