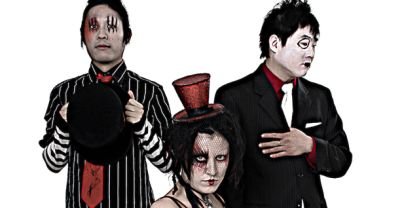 "Our band blends the fuck-it-and-just-play mentality of punk with the theatrics of cabaret," says Tragic Tantrum cabaret-singer/guitarist Zephyrus Rex. The performance-art duo composes songs around a melodica and a toy xylophone. "There's a lot of unexplored territory there. With punk music, you can perform and entertain and deliver a message whether or not you have a wealth of musical know-how. In a way, it's sort of an underground music for the people, though not necessarily music for the masses."

"I think there's also an element of circus to our act," says singer/lyricist zOe. "There's something about painting your face that allows your true self to come out. With both Zeph and myself having a background in theater, it was a very natural thing to fall into. If our show were a dessert, I think it would be Red Hots mixed with chocolate, strawberries, and licorice. Hot, sweet, tart, and manufactured."

Tragic Tantrum's occasional third member, Zaza, sometime dances and sings with the group. "She studied ballet when she was younger, and she's a talented painter," says Zeph. "Some of her art is on display at Pokez in downtown San Diego."

So is there anything Tragic Tantrum would like to reveal to the world that perhaps few have ever known or guessed before? "One night, in another city far, far away, zOe spray-painted characters all over the town. No reason other than she wanted to know what the big deal was with graffiti. She succeeded, and her characters still lurk in some alleys and side streets there. People talked about these images, but the culprit was kept secret. She never did it again; once was enough. But she did prove her prowess, and she enjoyed the experience."

"Zeph is an old-school Nintendo fan. We even have a Wii. It's how Zeph gets his news and weather."

The band released their album Mirror Mirror in early 2011. In August of that year, they changed their name to London Below. However, by 2016, Tragic Tantrum was back and appearing around town.