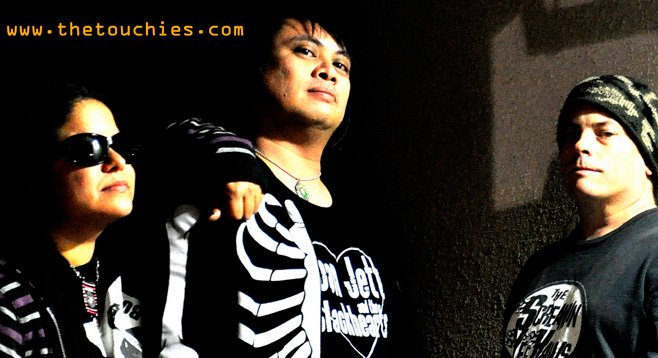 Influences: The Ramones, the Groovie Ghoulies, the Muffs, the Jesus and Mary Chain, the Undertones

The duo has played together locally since 1995, originally known as Happy Endings, a band later rechristened the Esthas. “That [name] was our tribute to Fox 6 News anchor Estha Trouw and her awesome pixie haircut,” according to Stanze.

The debut Touchies performance was June, 2009, at the Ruby Room. The original lineup also included Arturo Gonzalez on lead guitar and backing vocals, and John “Gigo” Marquez on drums.

Early 2009 saw the departure of Arturo Gonzalez. As of 2010, the group included Stanze, Mishey, and drummer Lucky Bailey AKA Lucky Touchie, though Bailey was later replaced by original drummer Marquez.

The band plays original rock-n-roll songs with a punk feel, as well as covering a few of their favorite rockers like the Groovie Ghoulies, the Muffs, the Undertones, etc.

Their full-length Friends of the Friendless was released in May 2011. At the same time, the band put out a comedic-covers album David Cover-Riverdale, released in May 2011, includes irreverent versions of tunes like “Angelfuck” (Danzig), “First of the Gang to Die” (Morrissey), “Teenage Kicks” (the Undertones), “Only Shallow” (My Bloody Valentine), and “Ziggy Stardust” (David Bowie).

“The song choices may seem uncharacteristic [for us], but we wanted do a fun devil-may-care punk vibe for the Touchies and not take ourselves too seriously. The chosen songs really do reflect artists that we are inspired by.”

At least one track is actually performed as a cover of a cover of a cover. “One of our fave bands, the Groovie Ghoulies from Sacramento, has covered Neil Diamond’s ‘Look Out (Here Comes Tomorrow),’ a song made famous when covered by the Monkees. We cover the Groovie Ghoulies version, which has such a great fun vibe that welcomes the unwelcomed, and who can’t relate to that?”

The group was nominated in 2011 for a San Diego Music Award. Then, “We just got a tour van,” Mishey Touchie told the Reader in early 2012, “so we plan to book some shows in Vegas, LA, Phoenix, maybe another tour, or maybe even shows in NYC or Canada or even the UK and Europe.”

In early 2012, drummer John Marquez left the band, to be replaced by Vaughn Franklin (Downs Family), now rechristened Von Touchie for his new gig. They next began recording a vinyl EP, Mess with the Unicorn, Get the Horn, for release on their own Seek Therapy Recordings label.

In early 2013, “Freak Time,” the first single from their upcoming full-length began streaming online. Released June 11 via Seek Therapy Recordings, the album includes covers of songs by the Jesus and Mary Chain and the Banana Splits.