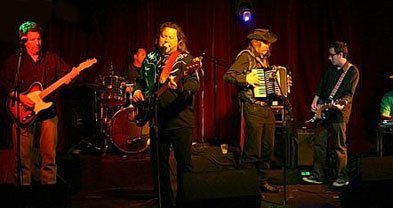 Tornado Magnet has created a melodic blend of insurgent alt-country, rock, and Americana music. Members of Tornado Magnet have picked up nominations for multiple San Diego Music Awards, highlighted by winning Best Country in 2005 and nominated for Best Americana Album in 2006 and 2007.

Bandleader Phil Bensimon is a veteran of local bands the Hideaways and Whisky Tango. The group’s 2009 album Double Wide was recorded at the Village Studios in La Mesa. It features guest performances by members of the Beat Farmers, the Johnny Cash Band, the Bastard Sons of Johnny Cash, Convoy, West Coast Pin Ups, Whiskey Tango, the Hideaways, Hazel O'Connor, and the Tony Sheridan band.

The Tornado Magnet lineup has always been somewhat fluid. “I am the bass player in this band,” says Bensimon. “However,” he said of the bass players that may float through his home studio, “the Magnets will give each of them a crack at the part and then go with the best one. This same process,” he said, “goes for all instruments.”

He mentions Magnets cofounders Tom Owens and Mike Ashley, and names such as Rand Anderson on pedal steel, mandolinist and steel guitarist Doug Myer, and Wolfgang Greaskemp on accordion, all Magnet regulars, as well as Joey Harris, who, when not otherwise engaged with his own projects, performs and records as a Magnet.

“Fade To Blue,” the first single off Bob’s Your Uncle, hit #11 on the USA national Roots Music Report. The next two singles were “Digby Goin Down” and “High Time.” A limited edition vinyl EP teaser was also released, featuring all three other singles from Bob’s Your Uncle.

Much of 2012 was spent at the Village Studio in La Mesa, recording a full-length with producer Ashley Bensimon. A new single was released in December 2012, “Here & Now,” followed by “Don't Slip Away” in January 2013, then “Some Day” followed up by “Hell Of A Ride” in May 2013.
Bensimon.