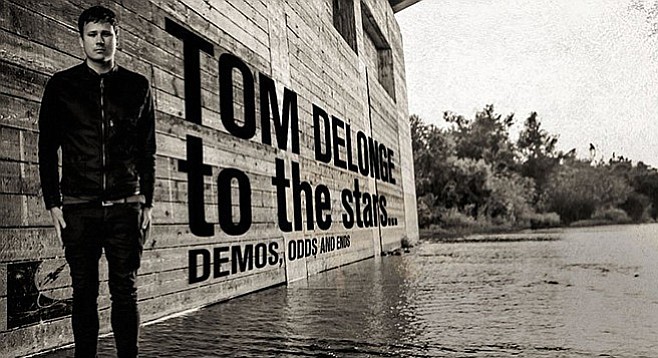 Influences: The Descendents, Screeching Weasel, the Cure, Rancid, Green Day, the Ramones, the Buzzcocks, the Jam, the Undertones, the Offspring, the Queers, the Lillingtons

Blink-182 was originally formed in 1992 by Tom DeLonge (vocals and guitar), who quickly recruited Mark Hoppus (vocals and bass) and Scott Raynor (drums) in Poway, California, a northern suburb of San Diego. Travis Barker replaced Raynor on drums in 1998, midway through a U.S. tour.

Blink announced they were going on an "indefinite hiatus" on February 22, 2005. DeLonge went on to form a different style of band called Angels and Airwaves, while Hoppus and Barker spawned a more punkish yet poppish-style band called +44.

In 2009, the band announced that it would indeed regroup to record and tour. At the time, DeLonge was the only member still living within San Diego. By early 2010, he was selling his house in Rancho Santa Fe, the same neighborhood where Hoppus had previously lived.

After DeLonge was diagnosed with a form of cancer in 2010, he used his alter ego Boomer to promote the Keep A Breast programme and its I Heart Boobies bracelets.

Rehearsals were underway in summer 2014 for a new Blink 182 album, a process made more difficult due to DeLonge living in San Diego, while Barker was living in Los Angeles and Hoppus living in London. That Autumn, it was reported that Weezer frontman Rivers Coumo and Hoppus had written tracks for McBusted's debut album.

However, it appeared Tom DeLonge quit the trio - again - in January 2015. "March 1, I will be launching personal recordings of new Blink demos along with a few extra tracks on TomDelonge.me," the band's ex-frontman then announced online.

His debut solo album To the Stars: Demos, Odds and Ends was preceded by the singles "New World" and "The Invisible Parade." The album compiles new material written by DeLonge as well as demos that were written for Blink 182. In addition, according to his Twitter posts, "I am putting out four albums in one year, this year...two albums with Angels [and Airwaves], two albums from myself. Three of them are released with novels. This has been in the works for a couple of years."

DeLonge and New York Times best-selling author Suzanne Young teamed up for the release of Poet Anderson …Of Nightmares, the first of a planned trilogy of Poet Anderson reads. The novel, out October 6, 2015, "explores an unknown world where dreams meet reality and the chasm between the two sometimes disappears," according to a release.

DeLonge and author Suzanne Young teamed up for Poet Anderson …Of Nightmares, the first of a planned trilogy. The novel, released October 6, 2015, "explores an unknown world where dreams meet reality and the chasm between the two sometimes disappears," according to a release.

His TV special The Pursuit of Tone: Tom DeLonge debuted August 19, 2016, on the Audience Network, featuring clips from his entire career and a visit to his childhood home in Poway. The following year, he announced he was directing a sci-fi movie called Strange Times, starring Jack Samson (Zodiac) and Lizze Broadway (Bones, Chicago PD).

In October 2017, DeLonge announced the launch of the To the Stars Academy of Arts & Science, described as "a consortium of scientists, aerospace engineers and creatives that will work collectively to allow gifted researchers the freedom to explore exotic science and technologies with the infrastructure and resources to rapidly transition innovative ideas into world-changing products and services."

"The public interest in the outer edges of science and the understanding of phenomena has always been suffocated by mainstream ideology and bureaucratic constraint," company President and CEO DeLonge explained in a press statement. "We believe there are discoveries within our reach that will revolutionize the human experience, but they can only be accomplished through the unrestricted support of breakthrough research and innovation."

As of 2018, DeLonge was working on a new sci-fi TV series for the TBS network based on his 2016 San Diego-based skateboard-themed graphic novel Strange Times.