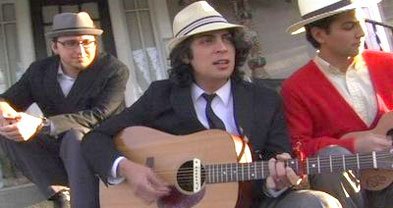 On their websites, Julian-based folk rockers the Smart Brothers list “the Road” as their hometown. Considering the trio played 273 shows in 2010, the road seems to be exactly that — home.

“We cover a lot of ground,” said Jesse Daniel Edwards, aka Jay Smart, one of the band’s singer-guitarists.

SBs have covered a lot of ground since their first year-and-a-half-long tour in 2008, when they traveled the country in their 1974 Volkswagen Westfalia, earning their bread by busking on street corners.

“We wouldn’t have stopped, but we burned a hole in the motor,” said Smart. “People would see us on the street and invite us into their homes.”

Brothers Jay and Lou Smart and childhood friend Mike Reed, moved on to playing college campuses and festivals. The change in venues came shortly after a Nashville-based booking agent signed on to work for the band earlier this year.

“Before, when we were busking on the streets, no one would pay attention and you’d have to pull out all of the stops to get people to listen to more than one chord of a song. It was a whole different mind state. Now, we get to these festivals the day before for sound checks. It’s a lot different. It’s a lot easier.”

In 2011, they played the Floyd Fest in Virginia, the Shakori Hills Grassroots Festival in North Carolina, returning to Pensacola Beach, Florida, in the summer to play the De Luna Fest, where they appeared the previous year with headliners Willy Nelson, Edward Sharpe and the Magnetic Zeros, and Stone Temple Pilots.

The Smart Brothers were nominated for Best New Artist at the 2008 San Diego Music Awards, and Best Acoustic Act at the 2009 Awards. Jesse Daniel Edwards has released solo albums including Lie to Me. He launched a new group in 2013, Jesse Daniel Edwards & Super Inc., releasing an album called American Dreaming the following year. They played May 10, 2014, at Lestat's, for a bill that also included Kelsea Little.