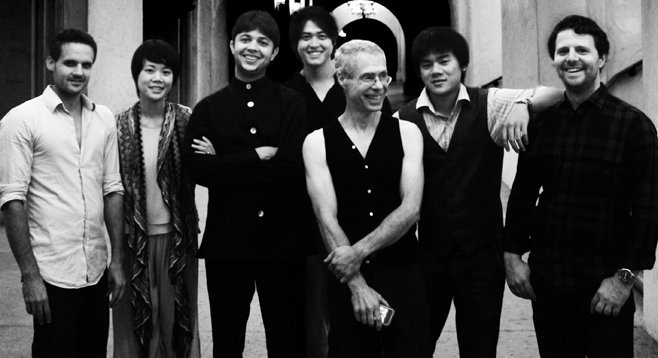 Based in La Mesa, Swarmius-Hausmann Project is an electric mini-orchestra of raised-on-rock, classically trained virtuosos shredders bent on warping trans-classical music into new venues & genres, exploding all notions about the where, what and how of it.

What kind of music would Mozart make if he were currently living on the beach in southern California?

“The Swarmius-Hausmann Project is a new melding of two groups that have each been around for several years,” says Joe Waters of the seven-piece collaboration of the Swarmius Trio and the Hausmann String Quartet. “We merge classical music with rock, hip-hop, jazz, and world-music genres by creating music that’s easy to get into, with strong hooks and grooves, that also has additional levels with all sorts of things to discover, like musical references, juxtapositions, and palindromes.”

Featuring members of the Swarmius Trio, Lionheart, Hausmann String Quartet, and Saximus, the band made its concert debut July 17, 2012, opening for the Surfaris at the Belly Up Tavern.

Though ostensibly rock and roll, Waters notes that performances demand classically trained players. “The music is extremely demanding, like extreme sports. The songs are composed, not improvised, and the musicians are reading music onstage or have their parts memorized. The electronic sounds are all created from scratch, a painstaking process that’s necessary in order to realize the unique vision of the band. There are elements of electronica, surf, dubstep, gypsy, video-game sounds, and thousands of other things.”

Waters sums up their sound as “Moby gone over to a dark side, where Yoko Ono is the dungeon master and Brian Eno keeps score. We’re trying to make music that is classic, not classical.” In 2013, the lineup was Waters, Isaac Allen, Eric Chin, Angela Choong, Jeremiah Shaw, Todd Rewoldt, and Justin Dehart.