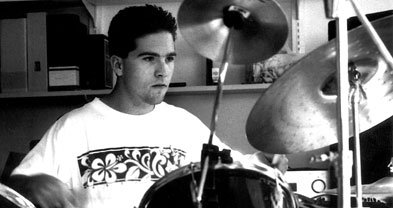 SixthDay’s debut Now Is the Time includes songs cowritten by their late drummer Andy Campbell, but not those tracks as recorded with Campbell.

“Those recordings never made it out of the mixing and mastering phase due to financial reasons,” according to singer Rocco Torres. “Currently, those tracks are being held by our original producer. He’s demanding some more payment in order to release them to us. He’s being kind of a dick about it.”

Campbell, who suffered from schizophrenia, took his life at the age of 21. Says Torres, “The drum tracks on this album are all by Turtle Sanders, who joined after we fired our second drummer for cocaine use.”

The 11-track album closes with a tribute to Campbell called “Super Angel.” “We wrote it in my garage the day before Andy’s funeral, where we performed it. The title comes from a picture of Andy that his mother showed us, with him as a little kid, about four or five. He had saved a bird with a broken wing, and his mom made a cardboard sign that said ‘Super Angel’ that he was wearing around his neck.”

At band gigs, they often request donations to the Andy Campbell Multimedia Scholarship fund at Palomar College. The scholarship in Campbell’s name is awarded to two students each spring — one for studying graphic arts and another for studying digital media.

“Our best local gig was when we opened for Skid Row at HOB,” says Torres. “The house was full for this gig, and we didn’t even know until half way through our set. We later got a count from the door and there were almost 1000 people there that night. During one of our songs, the lighting guys popped on the house lights. That moment was the first time we got to see just how many people were there. I remember us all looking around at each other and just laughing hysterically and shaking our heads.”

SixthDay released their debut album Now is the Time in early 2011. According to Torres, “The name of the album comes from the fact that there are several references to time on the tracks of this record in various contexts. The cover art depicts this concept visually, with the clock embedded in the stained glass window, with the SixthDay symbol at the 6 o'clock position. The SixthDay symbol is the roman numeral 5, with the roman numeral 1 pushed into the middle of the 5.”

“The stained glass represents the fragility and importance of timing in any endeavor. The concrete wall is for strength in support of the fragile time piece. Inside, the album cover is filled with lyrics and different clocks and textures behind them.”