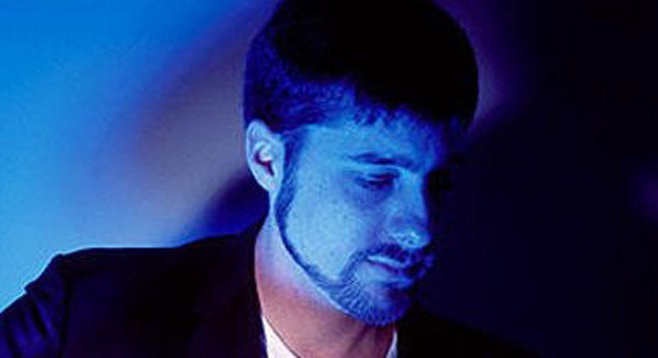 Sound description: Imagine Paul McCartney circa 2007, if he hadn't been secretly replaced by a plastic-surgery altered dopplegänger after recording Abbey Road.

"I was named after an Indian boy that my father treated at a domestic psych ward during the Vietnam War," he says. "This eight-year-old boy named Simeon had a rare pituitary dysfunction that matured him too early so he was, in effect, a boy trapped inside a man's body. I could probably say the same about myself. People I meet are often disbelieving at how rock-and-roll my name sounds, to the point where I actually say I didn't have it legally changed or anything. I just had cool quasi-hippie parents."

Flick was in two underground bands in the nineties, CRUX and Sages of Memphis, with the latter landing two songs on MTV's Road Rules. He has also fronted the band Alpha Ray, and has toured both U.S. coasts. He usually performs solo, though he's sometimes accompanied by bassist/singer Matthew Stewart.

He's been told -- accurately -- that his songs conjure vintage Paul McCartney. "I consider McCartney the ultimate Beatle. While John was loafing at his mock-Tudor palace, Paul was mastering all the instruments, constantly immersed in the betterment of his art, thinking of all the grand ideas like Sgt. Pepper, showing up early and leaving late, and pushing the envelope across the board. John was the fire under Paul's ass."

Flick's third album Reactive Soul was released in October 2006. The following year, he was nominated for a San Diego Music Award, for Best Local Recording.

In summer 2010, he released his album Piquant. "What sets it apart from the previous three albums is that this time I decided to self-produce and record it at home, informally inaugurating Blue Chair Studio in the process, in addition to the usual writing of the material and playing all the instruments."

"The irony of CityBeat slamming me and the record in their Great Demo Review was that they praised the backing musicians, not knowing it was all done by me, heh heh."

Flick's full-length Sub Rosa was recorded in late 2012. “The album title is indicative of the bent of the material. It’s Latin for ‘under the rose,’ so all the songs reveal something of my seamy underbelly. It’s also a tribute to my favorite Pixies album, Surfer Rosa, and, if you say the words together, it sounds a bit like the Spanish word ‘sabrosa,’ which means tasty, flavorful, and delicious.”

DIY is the new order of the day for this, his fifth studio album. “I wrote, performed, engineered, and produced the record myself. It’ll be self-released and only available digitally since CDs, with the exception of their lingering utility at live shows, are now obsolete. I’m also designing the album cover myself this time. That’s the main newness.”

Recorded at his own Blue Chair Studio, Flick says, “Paul Abbott handled the mastering at his ZenMastering facility, putting the final sonic polish on what I honestly feel is my best work to date in all its DIY facets: tighter songs, better production, and more proficient engineering with a clearer result that should inspire a stronger emotional response. Unless you’re a zombie. And, hopefully, it’ll garner some more lucrative career developments on the interwebs and other media.”

Fifteen songs were recorded for the album (with one possibility carried over from the sessions for his previous release Piquant), 11 of which made the final cut. “Of the five outtakes,” says Flick, “there were two I felt could still go out in some capacity, namely as free [preview] downloads, as they struck me as strong aural statements, albeit on the rawer side of my genre spectrum.” The two free outtakes, “Manifesto” and “The Dark Side,” can be downloaded from SoundCloud.

Flick also plays in an acoustic covers band, Scratch. That group, formed in early 2010 and featuring Eric Oberschmidt and Mike Strawbridge, has supplanted most public performances of Flick’s own music. “The truth is that people know what they like, and they like what they know, so it’s been a wonderful change of pace to have the easy connection and instant gratification of an approving crowd through playing well-established covers.

“It’s also nice to actually get paid for the pleasure.”

In addition, Flick began playing bass for Podunk Nowhere in 2014, as well as working with Christopher Dale. His sixth album Souvenirs d'Amour was released in January 2016.